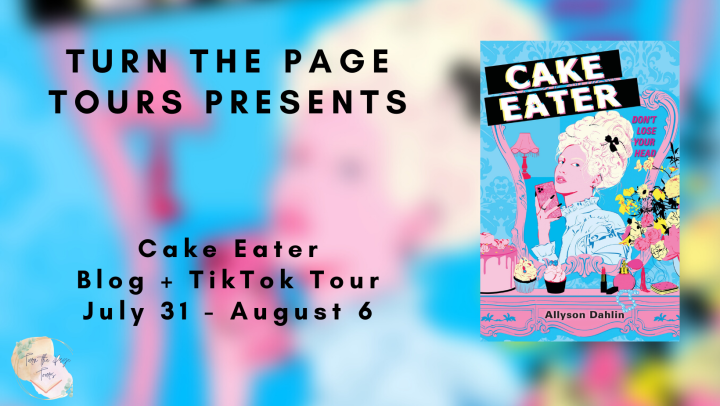 I received an eARC of Cake Eater by Allyson Dahlin as part of the Turn the Pages Blog Tour.

Decadent, thrilling, and romantic, this Black Mirror-esque retelling of the reign of one Marie Antoinette is perfect for fans of THE BELLES and AMERICAN ROYALS.

The year is 3070, and Marie Antoinette has just arrived at the glittering, thrilling palace of Versailles to marry the shy, soft-spoken Louis-Auguste.

But beneath the luxurious world lies a sinister underbelly and an uncompromising elite who want to keep Marie and Louis pawns in a deadly game.

Will history repeat itself? Or will these doomed lovers outwit their enemies and escape their grisly fate?

Cake Eater will take readers to a dazzling world full of breathless luxuries, deadly secrets, and a thrilling romance that attempts to rewrite history itself.

If you know anything about Marie Antoniette and her story, you have an idea of how tragic her life was, but Allyson Dahlin takes this to another level in Cake Eater with a Black Mirror-esque twist. The setup for this novel is brilliant and I am happy to say that the story lived up to its striking cover.

There is something so lush about the writing and the world that Allyson Dahlin has built here, which feels very much appropriate for a story about Marie Antoniette. I think taking that real historical figure and placing her in the year 3070 was genius and worked so well. I could totally imagine her as a social media influencer! I always appreciate books that explore social media, and I thought that this book looked at it through a unique lens. It touched on the politics behind using an app like Instagram and how important it was for Marie Antoniette of the future to not only create a following but to make sure that her audience had a certain impression of her. It is something that she doesn’t take lightly!

What was so brilliant about how the story unfolded was the subtle and slow evolution toward the darkness that occurs. We follow Marie as she sees Versailles for the first time and she describes its grandeur, and there are a lot of references to neon lights, grand statues, over-the-top parties, and what you might expect from a future Versailles. Slowly, Marie comes to realize that something more sinister is happening here and it is so unsettling to the reader, but it had me turning the pages!

Of course, it wouldn’t be Marie Antionette’s story without King Louis XVI! I found Louis to be a character who was easy to fall in love with and I won’t soon forget him!

Cake Eater felt like an uncommon mix of genres, from Sci-Fi to thriller to romance, and I was invested in it all! I will admit that it took me a minute to get used to the future slang that the author invented, but I eventually got over it and understood why it was included.

I was so impressed with Allyson Dahlin’s debut and I cannot wait to see what she writes next. I would love if she continued to take historical figures and put them into future situations. It would be an interesting niche, that is for sure!

Allyson Dahlin grew up on a farm in central New York, where she had little to do but read loads of library books and make up magical and slightly creepy stories about the woods and farm animals while pretending to be a witch/homesteader. She studied psychology in college while working as a housekeeper at a motel in Cooperstown. That job involved a lot of boring hours to think up backstories for the guests whose rooms she cleaned. A shawl left on a chair by an aging opera soprano, a stack of old baseball cards left by a Hall of Fame inductee, and the legend of a monster in the lake were all fodder for stories. It was during that time she transformed from a reader and a daydreamer to a writer.

With some writing courses and a psychology certification in hand, Allyson worked in school counselling and then at a boarding school for girls with complex trauma. Writing kept her spirits up during her intensely emotional work. Eventually, she fell into internet marketing, which meant writing for her day job as well as focusing on her novels. Her first novel, CAKE EATER, was inspired by a trip to Versailles and the realization that the circumstances of Marie Antoinette’s life could just as easily happen today.