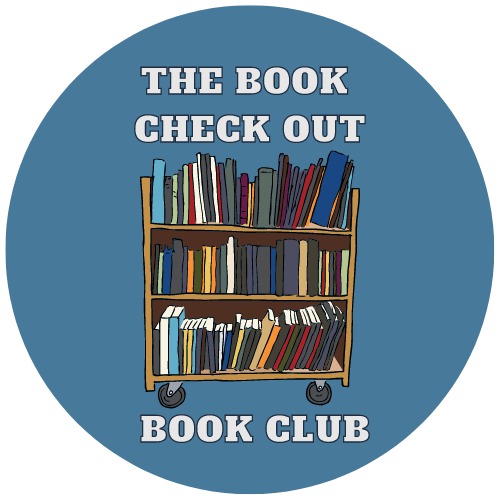 My favourite thing about being part of the book community is connecting with other readers, so I jumped at the chance at co-hosting The Book Checkout Book Club. If you followed along with my Memoirs of Lady Trent read-a-long, you will recognize by co-hosts! They are Sarah from Bright and Bookish, Kristen from Kristen is Fully Book’d, Cait from Cait Coy, and Marie from Maria Might Read That.

This book club is bimonthly and starts in September. So, we will read a book in September with a live show for the book in October, then read a book in November, with a live show in December, and so on. The point of the readathon is to push ourselves to read books out of our comfort zone or ones that have been on our TBR each month. Each host will have a turn at choosing a few books for the fellow co-hosts to vote on and eventually we will have community members vote as well!

Sarah had the first choice and they gave us a list of books to vote on. My vote lost, but I am thrilled about the book that was ultimately chosen, which is Unconquerable Sun by Kate Elliot. I have never read anything by this author, but I have seen her books around. I need to read more SciFi because I love it so much, so this is perfect.

GENDER-SWAPPED ALEXANDER THE GREAT ON AN INTERSTELLAR SCALE

Growing up in the shadow of her mother, Eirene, has been no easy task. The legendary queen-marshal did what everyone thought impossible: expel the invaders and build Chaonia into a magnificent republic, one to be respected—and feared.

But the cutthroat ambassador corps and conniving noble houses have never ceased to scheme—and they have plans that need Sun to be removed as heir, or better yet, dead.

To survive, the princess must rely on her wits and companions: her biggest rival, her secret lover, and a dangerous prisoner of war.

Take the brilliance and cunning courage of Princess Leia—add in a dazzling futuristic setting where pop culture and propaganda are one and the same—and hold on tight:

This is the space opera you’ve been waiting for.

There is a Discord for the book club, which I encourage you to join! I have finally started to embrace Discord and I am loving it.