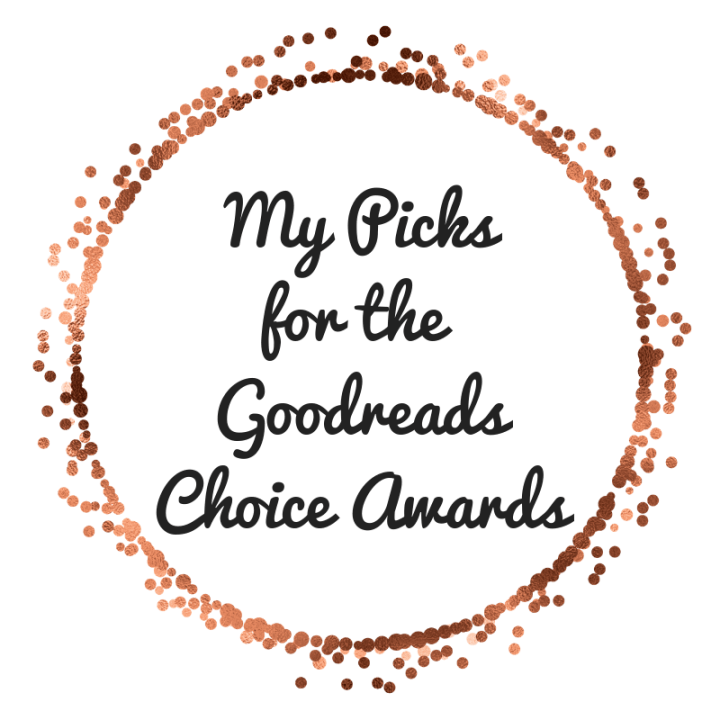 We all know that there are many issues with the Goodreads Choice Awards and that at the end of the day it is a popularity contest, but that does not stop me from looking forward to it every single year! I thought it would be fun to let you know all of the books I voted for in the first round and my thoughts about the nominees in general.

Looking at this category made me realize that I have been leaning more towards genre fiction than literary fiction this year, which is definitely a shift in my reading! I have usually read more books in this category. This year, I have only read two- Black Buck, which I thought did some interesting things and is the one I voted for, and Beautiful World, Where Are You, which I just didn’t love.

Many of the other nominees are on my TBR, including Cloud Cuckoo Land, The Sentence, The Reading List, and Detransition, Baby.

My predicted winner: Beautiful World, Where Are You (The power of Sally Rooney!)

I cannot believe that I have read eight of the books in this category. I don’t normally think of myself as a big thriller/mystery reader, but obviously, I am!

While there were some amazing books in this category (The Good Sister in particular!), I knew right away that I was going to vote for Razorblade Tears. I am not at all surprised that The Maidens was nominated, despite it being my least favourite book of the year. All Her Little Secrets is a new one to me and it only has 684 ratings on Goodreads, so I am curious about that one.

My predicted winner: The Push (though there is a Stephen King nominated and those often win…)

I do not read as much historical fiction as I used to, but I have read three of the nominees and enjoyed them all. I ultimately voted for The Final Revival of Opal & Nev because it was the most memorable for me and I loved the format. I almost voted for Malibu Rising though! The other one I have read is The Paris Library.

A lot of the nominees are on my TBR, but Yellow Wife and The Lincoln Highway are top priorities. A few of the nominees were new to me and I instantly added West With Giraffes to my TBR- sounds incredible.

My predicted winner: Four Winds (It did win Books of the Months best book of the year…)

You know I had to vote for The Book of Magic! Practical Magic is my favourite fantasy series. That said, I almost voted for The Jasmine Throne because I thought that book was special and is one I appreciate the more I think about it. The Inheritance of Orquidea Divina is another one I wish I could vote for.

I have also read She Who Became the Sun and For the Wolf, both of which I am happy to see nominated. Quite a few of the others are on my TBR as well. I keep meaning to read A Master of Djinn!

My predicted winner: A Court of Silver Flames (I feel like Sarah J Maas always wins this category)

I went back and forth on who to vote for within the romance category! I have read seven of the nominees, most of which I loved. I initially voted for It Happened One Summer but the more I thought about it the more I realized Life’s Too Short truly is my winner. I also thought about voting for The Heart Principle because I adore Helen Hoang, but the romance was really in the background for that one. Also, Act Your Age, Eve Brown is another favourite of mine!

The Charm Offensive and The Love Hypothesis are the two books on the list that I have not read that I am most interested in. I tried to read The Spanish Love Deception but just did not get along with the writing.

I will say it is interesting that there is no historical romance on the list. I know that is a popular subgenre!

My predicted winner: People We Meet on Vacation (People seem to love Emily Henry and I think her books have crossover appeal)

I have read three of the books nominated for the science fiction category and I really could have come up with a reason to vote for any of them. Kazuo Ishiguro, Andy Weir, and Becky Chambers are three of my favourite authors! I chose Klara and the Sun because I thought it was the most interesting and hit me in a different way from the other SciFi that I have read.

A lot of the books nominated are new to me, which is exciting! I want to go through them all and see if there are any that I want to add to my TBR.

I have only read two of the books in this category, Summer Sons and Alls Well. Both have merit, but I absolutely loved Summer Sons and was thrilled to see that it was nominated! It was my perfect dark academia novel and I can’t wait to read more from this author.

I am sad that I haven’t read My Heart is a Chainsaw yet! I have owned it since the day it came out.

I was surprised to see that I had read one book in the humor category, let alone two! It is definitely not my usual genre. I almost voted for How Y’All Doing? because I love Leslie Jordan, but I had to give it to Broken because I have read and loved all of Jenny Lawson’s memoirs.

The only other book that is nominated that I am interested in is Carnival of Snackery because I do appreciate David Sedaris.

My predicted winner: Year Book (I went back and forth on this, but I figured people will vote for this since it is Seth Rogen)

I have not read as much true crime this year as I usually do, but I have to say that I was so impressed with Last Call and was excited to see it nominated for the nonfiction category. It is one of those true crime novels that focus on the victims, which is refreshing.

The only other nominee that I have read is Cultish, which I liked but didn’t love.

My predicted winner: I am torn between either Bill Gate’s book or John Green’s. I think they will get votes just because of who they are!

I have really been slacking on memoirs this year! Somebody’s Daughter is the only book in this category that I have read, but I was happy to vote for it because it was quite good.

Crying in H Mart and Aftershocks are two I have my eye on, and I wouldn’t mind reading Stanley Tucci’s book as well!

My predicted winner: Crying in H Mart (It seems to be the book on this list that received the most buzz!)

I read Empire of Pain this month for Nonfiction November and thought it was incredible and has a good chance of winning. I am in the middle of The Woman They Could Not Silence and I just think Kate Moore has a special way of writing nonfiction. I might just change my vote once I am finished!

A few others are on my radar, especially Four Hundred Souls and The Three Mothers.

My predicted winner: Vanderbilt (I know people have a fascination with the Vanderbilts and Anderson Cooper is the author; however, I do think Empire of Pain could win!)

I have read some incredible debuts this year, some of which are on this list and many that are not. I knew I was going to vote for The Final Revival of Opal and Nev, but I could have made an argument to vote for She Who Became the Sun or Honey Girl.

I really want to read Fire Keeper’s Daughter and am thinking I will try to get to it before the final round!

My predicted winner: The Spanish Love Deception (This one was hard because there was no clear winner for me, but I know that this book is wildly popular on TikTok and has dedicated fans!)

There was no question in my mind- as soon as I saw Ace of Spades was nominated I knew it was my winner. That said, there are some incredible books on this list. She Drives Me Crazy and Concrete Rose are both standouts to me, and many of the others are on my TBR!

My predicted winner: Ace of Spades (It has received so much well-deserved buzz, though I do think Concrete Rose has a shot because of the love for The Hate U Give!)

This is when I wish we still had write-ins! I would have written in Redemptor… Oh well, I still really loved The Ones We’re Meant to Find and was happy to vote for it. I also considered voting for The Gilded Ones because I thought it was a strong debut. The only other books I have read are Lost in the Never Woods, which I sadly didn’t love, and Lore, which I liked but not enough to vote for as the best YA fantasy of the year.

To be honest, none of the other books on the list appeal to me.

My predicted winner: Rules of Wolves (Leigh Bardugo is so popular!)

So that is it! There are a few categories where I have not read any of the nominees, so I obviously didn’t vote! Let me know who you voted for and if you agree or disagree with my predicted winners!