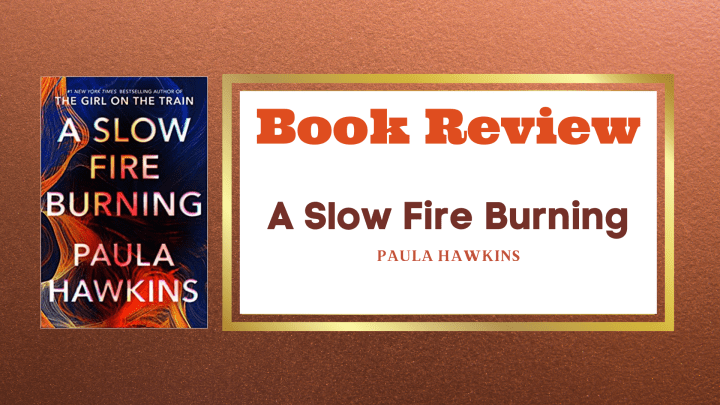 When a young man is found gruesomely murdered in a London houseboat, it triggers questions about three women who knew him. Laura is the troubled one-night-stand last seen in the victim’s home. Carla is his grief-stricken aunt, already mourning the recent death of yet another family member. And Miriam is the nosy neighbor clearly keeping secrets from the police. Three women with separate connections to the victim. Three women who are – for different reasons – simmering with resentment. Who are, whether they know it or not, burning to right the wrongs done to them. When it comes to revenge, even good people might be capable of terrible deeds. How far might any one of them go to find peace? How long can secrets smolder before they explode into flame?

Look what you started.

The story starts off with a woman finding the body of Daniel, who has been brutally murdered on his houseboat. We then follow the perspectives of three women- Carla, Daniel’s aunt, Miriam, his nosey neighbour, and Laura, the last person known to see Daniel alive. There are a ton of other side characters, so I do recommend having a pen and paper handy to write down how everyone is connected, as it can be difficult to keep track. This is especially true if you are listening to the audiobook!

The most fascinating part of the book for me was that we got to know the past of each of these women and find out why they were they were. I was especially most moved by Laura and her story was devastating in many ways. I truly could have read a book just about her and her life. That said, Carla and Miriam also had compelling backstories and it was interesting to see how everyone was involved in each others lives in some way. The characters are were the book shines, as the plot itself is quite simple.

I will say that I felt the ending was sort of predicable, but I still thought that the journey was worth it. There was a satisfying twist in the end, which I appreciated!

I highly recommend listening to A Slow Fire Burning on audio, if possible. It is narrated by Rosamund Pike, who starred in Gone Girl. I love her voice and thought she did an excellent job on the audiobook!

A Slow Fire Burning was a quick read and a fun book to pick up if you like character-based thrillers.