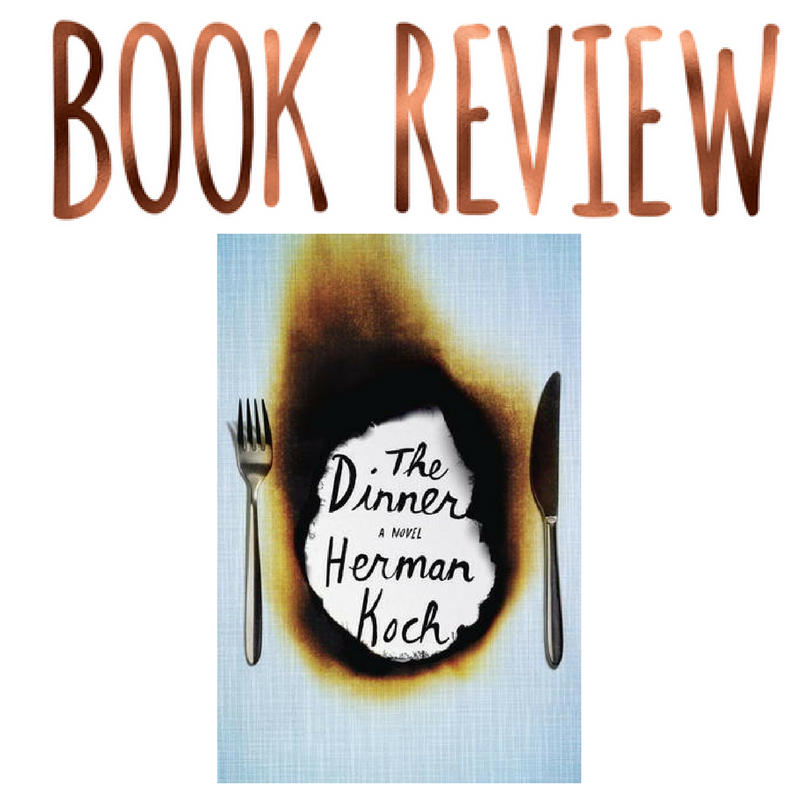 Goodreads Summary– An internationally bestselling phenomenon: the darkly suspenseful, highly controversial tale of two families struggling to make the hardest decision of their lives – all over the course of one meal.

It’s a summer’s evening in Amsterdam, and two couples meet at a fashionable restaurant for dinner. Between mouthfuls of food and over the polite scrapings of cutlery, the conversation remains a gentle hum of polite discourse – the banality of work, the triviality of the holidays. But behind the empty words, terrible things need to be said, and with every forced smile and every new course, the knives are being sharpened.

Each couple has a fifteen-year-old son. The two boys are united by their accountability for a single horrific act; an act that has triggered a police investigation and shattered the comfortable, insulated worlds of their families. As the dinner reaches its culinary climax, the conversation finally touches on their children. As civility and friendship disintegrate, each couple show just how far they are prepared to go to protect those they love.

Tautly written, incredibly gripping, and told by an unforgettable narrator, The Dinner promises to be the topic of countless dinner party debates. Skewering everything from parenting values to pretentious menus to political convictions, this novel reveals the dark side of genteel society and asks what each of us would do in the face of unimaginable tragedy.

I liked the fact that this story is set over one dinner. It is two couple sitting down for a meal at a fancy restaurant, and what they have to discuss is pretty dark and heavy. I found the juxtaposition pretty compelling.

How far would you go to protect your family, even if they did something horrible? I appreciated the ethical questions that this book addresses, and it was particularly interesting seeing these questions being answers by characters like the ones in The Dinner.

There was something about The Dinner that felt completely unrealistic. I could not get fully invested in what was happening because I just didn’t buy in to it. This does not seem like the kind of conversation that you would have in public, especially when one of the people involved is a pretty famous politician. You are just asking for someone to overhear. I also did not think that some of the actions that the characters take, particularly at the end of the novel, made a lot of sense.

I found this to be very odd! The author goes in to great detail about the food. I can vividly picture each and every course in my mind. I felt as though there was so much description about things that I felt were unimportant, and things that were actually important to the story were glossed over.

“If I had to give a definition of happiness, it would be this: happiness needs nothing but itself; it doesn’t have to be validated.”

“Sometimes things come out of your mouth that you regret later on. Or no, not regret. You say something so razor-sharp that the person you say it to carries it around with them for the rest of their life.”

“Unhappiness loves company. Unhappiness can’t stand silence—especially not the uneasy silence that settles in when it is all alone.”

The Dinner is a book that left me with mixed feelings. I wanted to like it more than I did. In theory it is a great book, but in reality, I just did not connect with it. I have come to realize that I like unlikable characters but they have to at least have an ounce of humanity.

If you have read The Dinner, please let me know what you thought! I would love to talk about it!

Did anyone see the movie? I am curious about it.

13 thoughts on “Review- The Dinner”