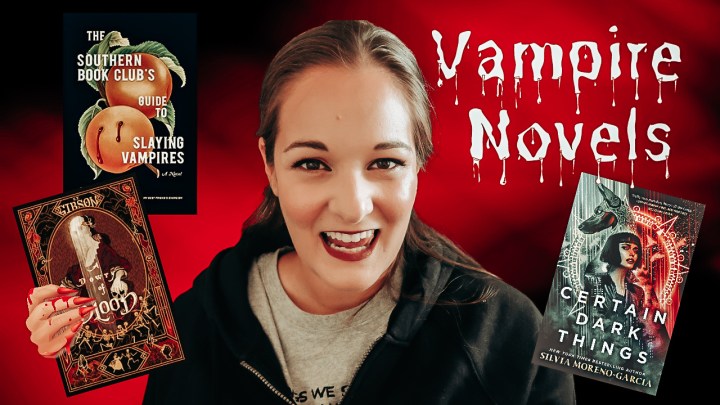 I have read a lot of vampire novels but haven’t loved many! In some ways, I love the idea of them more than anything. I always get excited when I hear about a new vampire novel but I never seem to get to them, and when I do, they are disappointing. I thought it would be fun to focus on vampire novels this October and I need your help with recommendations. I will share my top three vampire novels and tell you why I love them and I will also talk about a few that are on my TBR. Let me know which ones I should prioritize or if you know of one that I could potentially love.

The Blood of Eden series is my first love when it comes to vampires and will always be my favourite. I have a special place in my heart for these characters, and Jackal is one of my favourite villains. I know that Julie Kagawa is a popular author, and I adore her, but this series is underrated in my mind. No one talks about it! I will say that it took me a minute to get into The Immortal Rules, but it was worth it in the end. The series follows Allie, who is human and living in the Fringe. She has a deep hatred for vampires because they treat humans like blood cattle, but one night she dies and becomes a vampire and has to grapple with what that means for her. She decides to try and pass for human and the series plays out from there. The world-building is dark and gritty and there is also a romantic subplot. I need to return to this series one day because I just love it so much!

I adore Silvia Moreno-Garcia and her take on vampires in Certain Dark Things was so unique and probably my favourite when I think back on all of the iterations of vampires that I have read. This is an urban fantasy set in Mexico City and our main character, Atl, is an ancestor of the Aztec blood-drinkers and is on the run when she meets a human named Domingo who is determined to help her. Certain Dark Things is under 300 pages and is a perfect one-sitting read. I loved the atmosphere of this novel and that vampires are known to exist in this world but there are vampire-free zones. I would love it if the author wrote more novels in the world because there is a lot of potential here!

Grady Hendrix has been hit or miss for me, but I will always attempt his books because I love the campiness of them. The Southern Book Club’s Guide to Slaying Vampires is one of my favourites from him because I loved just how dark it got. There are some truly gruesome scenes that are not for those with weak stomachs. Some of these moments still haunt me. But that is what I look for in a vampire novel. I want to be scared and unsettled! I thought that there was some great commentary in this book and I love the fact that this vampire lives in suburbia. It follows a group of women who have a true crime book club and become suspicious of their new neighbour. That barely scratches the surface of what this is about but I think it is best to go in knowing as little as possible.

So, I don’t know what conclusions I can draw from looking at these three novels! One is YA dystopian while the other two are adult and more contemporary. The Southern Book Club’s Guide is horror in a more obvious way, while A Certain Dark Thing is more subtle. I think I just appreciate different takes on vampires and love seeing how they interact with humans. In all three of these novels, they are trying to blend in with human society, which I think is interesting!

There are so many vampire novels on my TBR, but these are the ones that I am most drawn to for whatever reason. Once again, we have quite a mix of genres here!

Let’s start with the YA because The Blood of Eden shows that I can like YA vampire stories and there are a few that are on my radar. Mere Mortals comes out on September 27th and it looks like it has the potential for the campy vibe that I am looking for. It does make me nervous that it has the trope of 100-year-old vampires going to high school but I am open to trying it because the twist is that they have been turned back into mortals. I also love that it follows a brother and sister!

I always put these YA anthologies on my TBR but never get to them. Vampires Never Get Old is no exception! I really would like to try this because some of my favourite authors have stories in this collection, including Zoraida Cordova, Julie Murphy, and Rebecca Roanhorse. This collection includes stories about lurking vampires of social media, rebellious vampires hungry for more than just blood, eager vampires coming out―and going out for their first kill―etc.

The Lost Girls has mixed reviews on Goodreads, but I just love the sound of it! It is pitched as being like John Tucker Must Die but it follows a girl gang of queer vampires looking for revenge. This sounds like a book you can’t take too seriously but will be a good time.

The Beautiful is probably the book on this list that most closely resembles The Blood of Eden series and I have heard great things about Renee Ahdieh. I am intrigued by the New Orleans setting and that this is a romance, historical fiction, and a murder mystery.

Dowry of Blood is a beloved novel in the bookish community and is one I hope to get to this fall! I forgot to mention that I did really enjoy Dracula, so maybe I should be on the lookout for some more Dracula retellings. Do you know of any? A Dowry of Blood follows Dracula’s brides and how they come together to unravel Dracula’s secrets!

I have been meaning to read something by Octavia E. Butler, so why not start with Fledging? All I know about this book is that it follows a 53-year-old vampires who wakes up with amenisia and quickly realizes her true nature and is determined to find out who tried to kill her and why her memory was erased.

Something that I discovered this year is that I do enjoy historical fantasy, so I thought I would give Opium and Absinthe a try! It was actually Sarah from the channel Bright and Bookish who put this book on my radar. It is set in New York in 1899 and Dracula has just been published. It follows Tiilie, whose sister has been found dead with two puncture wounds in her neck and her body drained of blood. Tillie is on the hunt for the truth while also taking opium for pain management and she is determined to learn what truly happened to her sister.

I think I could potentially be into literary fiction featuring vampes, which is why Woman Eating is on my TBR. It follows a vampire named Lydia, a mixed-race vampire, who is dying to try human food but can only digest blood. She also has a fascinated with humans even though she knows they are her prey. The book follows Lydia as she deals with all of these conflicting sides of herself.

I also wanted to put this 2023 release on your radar because The Witch and the Vampire became my most anticipated release of next year the minute I saw this cover! It is a queer Rapunzel retelling following a witch and vampire on a journey through a cursed forest.

What is your favourite vampire novel?

18 thoughts on “Give Me All the Vampire Books”