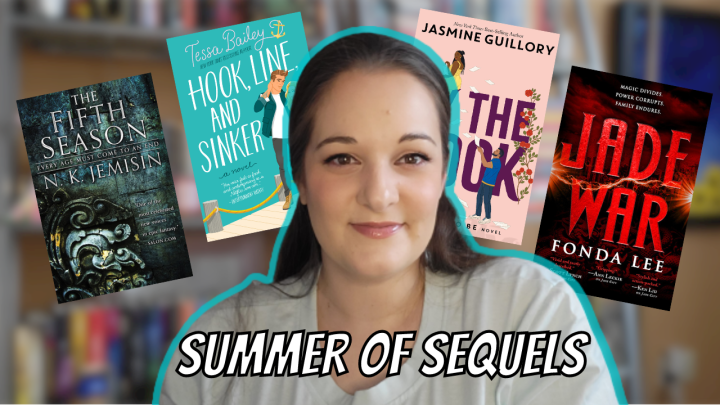 It is no secret that I am terrible at completely series. I talk about this phenomenon all of the time and how much I would like to change that. I say this, but then I never do anything about it! That changes this summer! I have decided to create a challenge for myself that I am calling my “Summer of Sequels” and I would love for you to join me. It is nothing series or overly planned out, but if enough people are interested I might create a Discord or something. Even if I am the only person that ends up doing this, I am excited about it! The entire idea is to focus on reading sequels this summer. There are a few series I would love to catch up on or complete over the next couple of months.

I read Annihilation years ago and thought it was so weird, and I enjoyed every second of it! I finally got my hands on the other two books in the trilogy and I keep meaning to pick them up. I have heard mixed things about the second book, which I think probably suffers from middle book syndrome. I am still willing to go into it with an open mind. I am really just here for the weirdness!

The Fifth Season was my favourite book the year that I read it, so I hate myself for not reading the other two books in the Broken Earth series. I have had the entire boxed set for years, so…

I know why I haven’t finished The Green Bone Saga. The books are so long and the first one crushed me. I just have not felt ready to continue with it until now!

I love the idea of reading cozy mysteries in the summer, and I just recently read the first book in the An Enchanted Garden Mystery series. Cozy mystery series are normally very long, but this one only has three books out right now, so it does not seem like as much of a commitment.

Sense and Second-Degree Murder is the sequel to Pride and Premeditation. These are cozy mystery retellings of Jane Austen’s novels and I had such a great time with the first one. I meant to read the sequel as soon as it came out (I even preordered it!), but, of course, it is sitting on my TBR shelf and judging me. I have a feeling this might be the first sequel I read for this challenge!

Genesis Wars is the sequel to The Infinity Wars, which is a book I read last year and talked about quite a bit. The first book ended on quite the cliffhanger, so I really should be itching to pick up the sequel. However, I have heard it also ends on a cliffhanger, so I am just not prepared. I have the audiobook downloaded, so hopefully, I will get to it soon!

I read The Eyre Affair a couple of years ago and adored it. I thought it was such an original concept and I ran out to buy the next couple of books in the series, but here we are years and I have not read them. The same could be said about the Inspector Gamache series by Louise Penny, but I have to keep this list at least a little bit under control.

There are two romance series I want to catch up on! Hook, Line, and Sinker is the sequel to It Happened One Summer, and I told myself that I would save it to read on the beach! By the Book is the companion novel to If the Shoe Fits and is a Beauty and the Beast retelling.

If I manage to read all of the books mentioned previously, these are the five books that I will turn to!

The Hidden Palace is the sequel to The Golem and the Jinni, which is a book I read earlier this year and has become a new favourite. The Hidden Palace was published almost ten years after the release of the first book, which is intriguing to me.

I read Fireborne last summer and was surprised by just how much I enjoyed it! It is the book that made me realize that I do enjoy dragon novels. I was particularly captivated by the politics in the first book and I am curious to see how that all plays out in Flamefall. The third and final book, Furysong, comes out in August, so it would be amazing if I managed to read that as well.

For the Throne is the follow-up to For the Wolf, a book I read last year and had a good time with! I have been anxiously anticipating the sequel because it follows the sister who was more intriguing to me!

The Jasmine Throne was one of my best books of last year and I cannot believe that we are getting The Oleander Sword so soon!

Of the five books in this “possibility pile”, A Prayer for the Crown-Shy is the one that I am most confident that I will read this summer. I absolutely adored the first book, A Psalm for the Wild-Built, and I know this will be another quick and moving read.

If you are interested in reading sequels this summer, feel free to join me and share the books you plan on reading! I will keep you updated throughout the summer on how it is going.

32 thoughts on “Summer of Sequels”