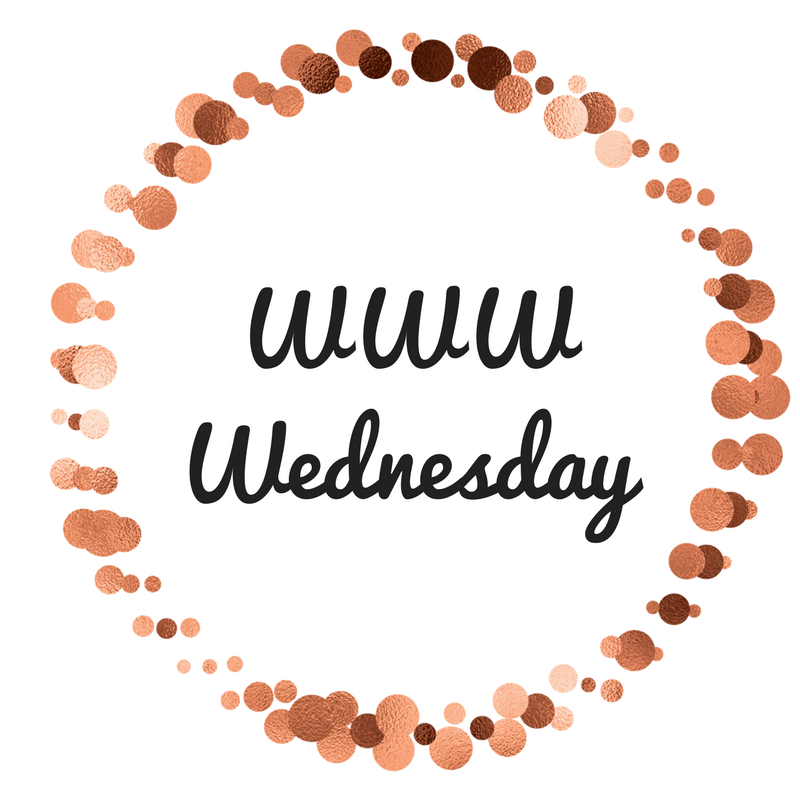 WWW Wednesday is hosted by Sam @ Taking on a World of Words! All you have to do is answers the following three questions:

Part scientific mystery, part dazzling interstellar journey, Project Hail Mary is a tale of discovery, speculation, and survival to rival The Martian–while taking us to places it never dreamed of going.

I am about 300 pages into Project Hail Mary and I am absolutely loving it! It is nothing like I expected it to be and is much more speculative than The Martian, but it is giving me everything I love about that book and dare I say I am liking it even more!? There is something about Ryland that I connect with and there are some great side characters, but I will leave it at that because I don’t want to spoil you at all. There is a lot of science talk, but it is fun and pretty accessible. I am enjoying being inside Ryland’s head!

Single mom Jess Davis is a data and statistics wizard, but no amount of number crunching can convince her to step back into the dating world. Raised by her grandparents–who now help raise her seven-year-old daughter, Juno–Jess has been left behind too often to feel comfortable letting anyone in. After all, her father’s never been around, her hard-partying mother disappeared when she was six, and her ex decided he wasn’t “father material” before Juno was even born. Jess holds her loved ones close, but working constantly to stay afloat is hard…and lonely.

But then Jess hears about GeneticAlly, a buzzy new DNA-based matchmaking company that’s predicted to change dating forever. Finding a soulmate through DNA? The reliability of numbers: This Jess understands. At least she thought she did, until her test shows an unheard-of 98% compatibility with another subject in the database: GeneticAlly’s founder, Dr. River Pena. This is one number she can’t wrap her head around, because she already knows Dr. Pena. The stuck-up, stubborn man is without a doubt not her soulmate. But GeneticAlly has a proposition: Get to know him and we’ll pay you. Jess–who is barely making ends meet–is in no position to turn it down, despite her skepticism about the project and her dislike for River. As the pair are dragged from one event to the next as the “Diamond” pairing that could make GeneticAlly a mint in stock prices, Jess begins to realize that there might be more to the scientist–and the science behind a soulmate–than she thought.

Funny, warm, and full of heart, The Soulmate Equation proves that the delicate balance between fate and choice can never be calculated.

I just started the audiobook for The Soulmate Equation and only managed to listen to a couple of chapters, so it is too early for me to have much to say about it! I love the premise though. I haven’t absolutely loved a Christina Lauren book since The Unhoneymooners, but I am hopeful about this one.

For cynical twenty-three-year-old August, moving to New York City is supposed to prove her right: that things like magic and cinematic love stories don’t exist, and the only smart way to go through life is alone. She can’t imagine how waiting tables at a 24-hour pancake diner and moving in with too many weird roommates could possibly change that. And there’s certainly no chance of her subway commute being anything more than a daily trudge through boredom and electrical failures.

But then, there’s this gorgeous girl on the train.

Jane. Dazzling, charming, mysterious, impossible Jane. Jane with her rough edges and swoopy hair and soft smile, showing up in a leather jacket to save August’s day when she needed it most. August’s subway crush becomes the best part of her day, but pretty soon, she discovers there’s one big problem: Jane doesn’t just look like an old school punk rocker. She’s literally displaced in time from the 1970s, and August is going to have to use everything she tried to leave in her own past to help her. Maybe it’s time to start believing in some things, after all.

I listened to One Last Stop on audio thanks to Libro.fm, and I ended up having mixed feelings about it. I love the concept of Jane being stuck on the subway and that there is a little bit of fantasy/mystery woven into this romance, but I never truly connected with it. I realized at some point that it is written in third-person present, and something about that kept me at a distance. For a long book, over 400 pages, I wish we got more about the romance and August’s roommates (I love the found family trope!), but instead it felt repetitive at times. I have not read Red, White, and Royal Blue, so I am curious to see what people who love that book think of this one!

Don’t you just love the smell of old books in the morning?

Madeline Moore does. Books & Moore, the musty bookstore her family has owned for generations, is where she feels most herself. Nothing is going to stop her from coming back after college to take over the store from her beloved aunt.

Nothing, that is—until a chain bookstore called Prologue opens across the street and threatens to shut them down.

Madeline sets out to demolish the competition, but Jasper, the guy who works over at Prologue, seems intent on ruining her life. Not only is he taking her customers, he has the unbelievable audacity to be… extremely cute.

But that doesn’t matter. Jasper is the enemy and he will be destroyed. After all—all’s fair in love and (book) wars.

I received two ARCs from HCC Frenzy on my doorstop on Monday, and it was such a lovely surprise. One of the books was Last Chance Books, which I was so excited about. I am always here for a book about books, and this one is being compared to You’ve Got Mail! That is all I need to know. Plus the cover is adorable!

What are you currently reading?