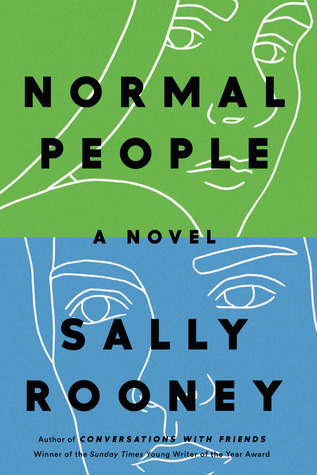 At school Connell and Marianne pretend not to know each other. He’s popular and well-adjusted, star of the school football team, while she is lonely, proud and intensely private. But when Connell comes to pick his mother up from her job at Marianne’s house, a strange and indelible connection grows between the two teenagers—one they are determined to conceal.

A year later, they’re both studying at Trinity College in Dublin. Marianne has found her feet in a new social world while Connell hangs at the sidelines, shy and uncertain. Throughout their years at university, Marianne and Connell circle one another, straying toward other people and possibilities but always magnetically, irresistibly drawn back together. And as she veers into self-destruction and he begins to search for meaning elsewhere, each must confront how far they are willing to go to save the other.

“Marianne answers the door when Connell rings the bell. She’s still wearing her school uniform, but she’s taken off the sweater, so it’s just the blouse and skirt, and she has no shoes on, only tights.”

Wow! I do not think I can accurately put in to words how special this books is. On the surface, the plot seems very simple, but there is so much depth and the story is more complex than it may first appear. It would have been so easy for the plot to lose it’s way, but it never does.

I could not put this book down. I finished it in two sittings, and when I wasn’t reading it it was always on my mind. Even now, a week after I finished it, I think about it often. Sally Rooney portrays such a honest and real relationship in a way that I do not think has ever quite been captured so perfectly before. Normal People is an interesting look at how someone can make you the best and worst version of yourself all at the same time. I appreciated that both of our main characters are flawed and imperfect. There is definitely character development, but not to the point where it is unrealistic or that they lose her they truly are.

Normal People is unique in that it is about a relationship, and I would say it is a love story, but it is not romantic. There are romantic moments, but it is not all sunshine and rainbows. It is so honest and raw. I think many of us will see parts of ourselves in these characters.

Normal People is also a commentary on race, class, and socioeconomic status. It is also a real look at the confusing transition from high school to university. There are a lot of subtle and meaningful themes throughout the novel.

Wholeheartedly YES! If you enjoy flawed characters who you still root for this is the book for you. Just know going in that there are triggers for abuse, suicide and suicidal thoughts, and depression.

Thank you to Penguin Random House Canada for sending me a copy of Normal People in exchange for an honest review.