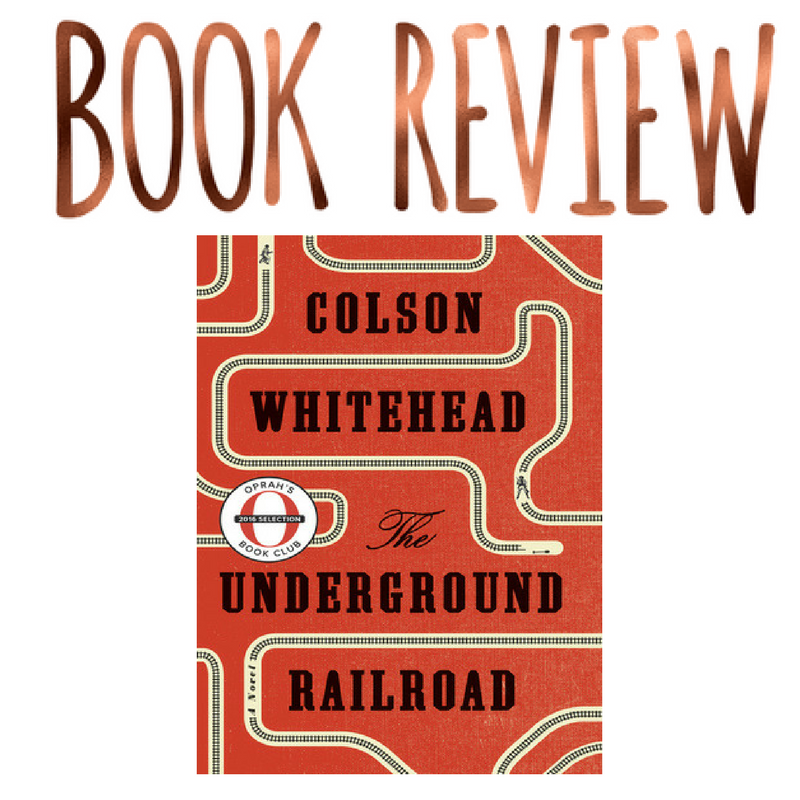 Goodreads Summary- Cora is a slave on a cotton plantation in Georgia. Life is hellish for all the slaves but especially bad for Cora; an outcast even among her fellow Africans, she is coming into womanhood – where even greater pain awaits. When Caesar, a recent arrival from Virginia, tells her about the Underground Railroad, they decide to take a terrifying risk and escape. Matters do not go as planned and, though they manage to find a station and head north, they are being hunted.

In Whitehead’s ingenious conception, the Underground Railroad is no mere metaphor – engineers and conductors operate a secret network of tracks and tunnels beneath the Southern soil. Cora and Caesar’s first stop is South Carolina, in a city that initially seems like a haven – but the city’s placid surface masks an insidious scheme designed for its black denizens. Even worse: Ridgeway, the relentless slave catcher, is close on their heels. Forced to flee again, Cora embarks on a harrowing flight, state by state, seeking true freedom.

As Whitehead brilliantly re-creates the unique terrors for black people in the pre-Civil War era, his narrative seamlessly weaves the saga of America from the brutal importation of Africans to the unfulfilled promises of the present day. The Underground Railroad is at once a kinetic adventure tale of one woman’s ferocious will to escape the horrors of bondage and a shattering, powerful meditation on the history we all share.

There is no denying that Colson Whitehead is a talented writer.  His prose is both beautiful and completely readable. It is quite apparent that Whitehead is passionate about this time in history and did a lot of research in order to get it right. I read an interview where he says that he read slave narratives.  I appreciated the fact that this book focuses more on the experience of slaves, as opposed to simply the history of the Underground Railroad.

I was not sure what to think about the Underground Railroad being an actual railroad, but Colson Whitehead made it work.  I have a new found interest in alternate history and this concept really intrigued me.  I do worry that some readers who do not know anything about the true history of the Underground Railroad might take this as fact.  I am obviously torn on this idea!

As a Canadian, I of course knew about The Underground Railroad, but it was not something I was taught school or researched on my own.  This book has inspired me to pick up non fiction books that focuses on this era. Any recommendations?

This is just my personally opinion, but I wish that the chapters that followed Cora’s story were told in first person.  I would have been able to form a greater connection to her and I think the book would have benefited from knowing her inner thoughts.

“Stolen bodies working stolen land. It was an engine that did not stop, its hungry boiler fed with blood.”

“Cora didn’t know what optimistic meant. She asked the other girls that night if they were familiar with the word. None of them had heard it before. She decided that it meant trying.”

“If you want to see what this nation is all about, you have to ride the rails. Look outside as you speed through, and you’ll find the true face of America. It was a joke, then, from the start. There was only darkness outside the windows on her journeys, and only ever would be darkness.”

The Underground Railroad was a great book to start the year.  It was thought-provoking and emotional. I appreciated the fact that the story does not focus on only one character.  We get to see many perspectives.  There was a chapter near the end that completely took me by surprise and had me in tears.  I highly recommend that you pick this book up!

16 thoughts on “Review- The Underground Railroad”