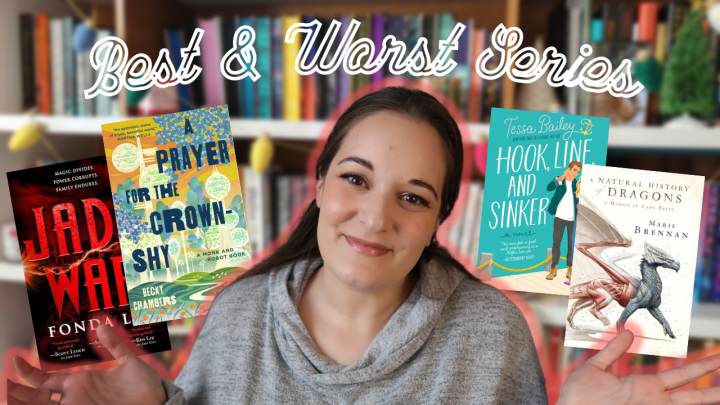 Mara from Bookslikewhoa originally created this tag. This was a fun way to call myself out and realize how much I failed at my goal of reading more series in 2022. You will see that I talk about many first books in a series in this post!

1. What is the best series that you caught up with this year that is still a work in progress?

I just read volumes 9 and 10 of Saga after waiting for years to read volume 9 because I was told it was going to break my heart, which it did. I am grateful that I took everyone’s advice because I don’t think I could have waited for four years to know what happened next. Saga is the graphic novel series that made me realize that SciFi is my sweet spot when it comes to graphic novels!

I am currently listening to the second book in the Beaufort Scales Mystery series and there are currently seven books in the series, so I have some catching up to do! This is an ongoing self-published cozy fantasy series that I adore!

3. What was your favourite first book in a series this year?

I started a lot of series this year, so I had a few options for this question, but I had to go with This Vicious Grace. This book caught me by complete surprise and I found this to be compulsively readable and thought the world was compelling. I cannot wait for the sequel!

4. What is a first book in a series you read this year that you think should have just been a standalone, not a series?

The Golem and the Jinni is one of my favourite books of the year and I absolutely adored it, but I don’t think that a sequel was necessary. I still have The Hidden Palace four stars because I just love Helene Wecker’s writing that much, but I don’t think that the sequel added much and I feel confident in telling others that they are perfectly fine with treating The Golem and the Jinni as a stand-alone.

5. What is your most over-hyped series of the year?

I read the entire Lady Trent series with some fellow BookTubers and while I enjoyed that experience, I was ultimately disappointed by where this series went. This was quite the rollercoaster for me!

6. What is a series that you DNFed this year?

I read The Falconer because I love books set in Scotland and I discovered historical fantasy often works for me, but I just have to accept that I am not a fan of fae stories!

No surprise that a Becky Chamber book was one of my best books of the year. I adore this duology so much and I can see myself reading it again and again. I actually thought that A Prayer for the Crown-Shy was stronger than the first book.

8. What was the biggest cliffhanger you had in a series this year?

Could you even call the ending of Black Sun a cliffhanger? It seemed to end so abruptly that I was left scratching my head!

9. What is your favourite spinoff series you read this year?

I have not read any spinoff series this year!

10. What is your most anticipated next book in a series that you read this year that will come out next year?

There are so many sequels I am excited for next year and I shared them in a separate post, so check that out if you are curious! This Cursed Light is the sequel to This Vicious Grace, Teach the Torches to Burn is part of the YA remix series and is a Romeo and Juliet retelling, and War Widow is the sequel to Blood Scion.

I really need to catch up on the Clocktaur War series and continue on with all of the series that T. Kingfisher has written in the same world.

12. What is your favourite series that you finished this year?

I tried not to duplicate any of my answers, but this is just the truth. My love for the Monk and Robot duology knows no bounds!

13. What is your favourite episodic series of the year?

I started a few cozy mystery series this year and they are episodic in nature, so I could have chosen any of those. I almost went with Baking Bad again but then I remembered how much I loved In the Company of Witches!

14. What is a series that you finally bailed on after holding onto it for a long time?

I read Golden Son last year and didn’t love it because I very much dislike Darrow, but I did try to read Morning Star since I own it but I couldn’t push through. I have officially unhauled this series!

15. What is the series you were most surprised that you liked this year?

I think of myself as someone who enjoys SciFi, but I tend to pick up light SciFi like Becky Chambers or more literary SciFi like Kazuo Ishiguro. So I wasn’t sure what I was going to think about Unconquerable Sun when it was chosen for book club, but I ended up having a great time with this! I even have an eARC of the sequel, Furious Heaven, which is almost 800 pages…

16. What is the series that you meant to catch up with or finish this year that you didn’t?

I do not have an answer to this question, but I think it is an interesting question, so I would love to hear your answers!