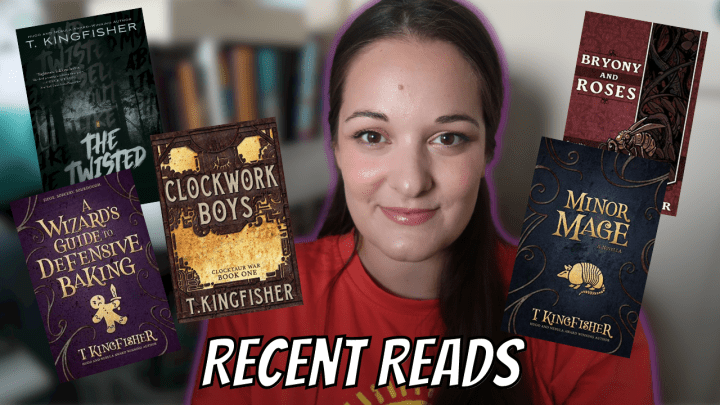 When a young woman clears out her deceased grandmother’s home in rural North Carolina, she finds long-hidden secrets about a strange colony of beings in the woods.

When Mouse’s dad asks her to clean out her dead grandmother’s house, she says yes. After all, how bad could it be?

Answer: pretty bad. Grandma was a hoarder, and her house is stuffed with useless rubbish. That would be horrific enough, but there’s more—Mouse stumbles across her step-grandfather’s journal, which at first seems to be filled with nonsensical rants…until Mouse encounters some of the terrifying things he described for herself.

Alone in the woods with her dog, Mouse finds herself face to face with a series of impossible terrors—because sometimes the things that go bump in the night are real, and they’re looking for you. And if she doesn’t face them head on, she might not survive to tell the tale.

If you know anything about T. Kingfisher, you know that she writes in various genres. The Twisted Ones is one of her horror novels and it goes to some wild places. If you are a fan of horror, I think you will enjoy this book; however, it is not the horror novel from Kingfisher that I would recommend starting with. I think What Moves the Dead is the one to go with! That said, there is a lot I liked about The Twisted Ones. The atmosphere is tense and there are some great characters. There is a dog at the heart of the story (who Kingfisher makes clear is alive by the end of the book) and he was a delight to read about! There are some great spooks and creepy moments- not a book to read late at night! I have mixed feelings about the ending, but I do wish I had read the Author’s Note first. It gave me a better understanding of what T. Kingfisher was trying to accomplish with this book. I have read many reviews that said The Hollow Places is better than The Twisted Ones, so I will give that one a chance in the future.

A paladin, an assassin, a forger, and a scholar ride out of town. It’s not the start of a joke, but rather an espionage mission with deadly serious stakes. T. Kingfisher’s new novel begins the tale of a murderous band of criminals (and a scholar), thrown together in an attempt to unravel the secret of the Clockwork Boys, mechanical soldiers from a neighboring kingdom that promise ruin to the Dowager’s city.

If they succeed, rewards and pardons await, but that requires a long journey through enemy territory, directly into the capital. It also requires them to refrain from killing each other along the way! At turns darkly comic and touching, Clockwork Boys puts together a broken group of people trying to make the most of the rest of their lives as they drive forward on their suicide mission.

I was warned that the Clocktaur War duology really is more like one book that has been divided into two, so ending the readathon with Clockwork Boys was probably not a good idea. The ending is quite abrupt and I should have started the next book right away, but, by that time, I was burnt out on T. Kingfisher’s books. I will get to it before the year ends because I have to know what happens next. I will say that this first book wasn’t plot-heavy- it was more about characters on a journey, which I don’t normally love. However, it always works for me with T. Kingfisher and was true with Nettle and Bone as well. I am thrilled that T. Kingfisher has written a number of series within the world of Clockwork Boys because it is so intriguing!

Bryony and her sisters have come down in the world. Their merchant father died trying to reclaim his fortune and left them to eke out a living in a village far from their home in the city.

But when Bryony is caught in a snowstorm and takes refuge in an abandoned manor, she stumbles into a house full of dark enchantments. Is the Beast that lives there her captor, or a fellow prisoner? Is the house her enemy or her ally? And why are roses blooming out of season in the courtyard?

Armed only with gardening shears and her wits, Bryony must untangle the secrets of the house before she—or the Beast—are swallowed by them.

As much as I love and have nostalgia for the Disney version of Beauty and the Beast, the retellings always highlight for me how problematic the relationship is. I think that T. Kingfisher was very much aware of this and did an amazing job of letting the reader know that the characters understand that the situation is not okay. The beast has his reasons for keeping Bryony in the house and he feels terrible about it. Bryony seemed to be more curious than anything and that is part of why she stayed. Bryony and Roses was a quick read for me and I had such a good time with it. I am not a gardener myself, but I still loved reading about Bryony’s love for gardening. I have said this before, but I just love reading about characters who are passionate about something, no matter what that is. And I have noticed that this is something T. Kingfisher tends to include in her stories and probably plays a role in why I love her books as much as I do! This book felt almost Gothic. I love that the house itself was a character and was capable of magic. Bryony forms an interesting relationship with the house, which might have been my favourite part of the story. The romance was sweet and predictable, with this being a Beauty and the Beast retelling, but it didn’t make me feel as uncomfortable as some of the past retellings I have read. This has made me so excited to dive into more of T. Kingfisher’s fairytales!

Oliver was a very minor mage. His familiar reminded him of this several times a day.

He only knew three spells, and one of them was to control his allergy to armadillo dander. His attempts to summon elementals resulted in nosebleeds, and there is nothing more embarrassing than having your elemental leave the circle to get you a tissue, pat you comfortingly, and then disappear in a puff of magic. The armadillo had about wet himself laughing.

He was a very minor mage.

Unfortunately, he was all they had.

When I saw the armadillo on the cover, I knew that I was going to adore Minor Mage– and I did! The armadillo might be one of my favourite familiars of all time. I read this book for the T. Kingfisher readathon and my love for her work has only evolved. I am starting to realize why I love her writing as much as I do. Minor Mage reminded me of A Wizard’s Guide to Defensive Baking in many ways and I was equally charmed by them. Kingfisher has this way of writing these stories that read like fairytales for children but that can be equally enjoyed by adults. Oliver, the main character in Minor Mage, is sweet and relatable and fun to read about. I loved seeing his journey and meeting all of the side characters he comes across along his journey. I said this same thing when I read Nettle & Bone, but I don’t normally love books about a quest, but T. Kingfisher’s take on that trope just works for me! I could see myself rereading Minor Mage when I need something light that I know will bring me joy!

A Wizard’s Guide to Defensive Baking

Fourteen-year-old Mona isn’t like the wizards charged with defending the city. She can’t control lightning or speak to water. Her familiar is a sourdough starter and her magic only works on bread. She has a comfortable life in her aunt’s bakery making gingerbread men dance.

But Mona’s life is turned upside down when she finds a dead body on the bakery floor. An assassin is stalking the streets of Mona’s city, preying on magic folk, and it appears that Mona is his next target. And in an embattled city suddenly bereft of wizards, the assassin may be the least of Mona’s worries…

I knew I was going to love A Wizard’s Guide to Defensive Baking and it is now my favourite T. Kingfisher novel! If you know me, you know I love books centred around food, but I don’t think I have ever read a novel where the food comes to life. It was so much fun! Who wouldn’t want a gingerbread companion and a sourdough starter who is pretty much a pet? Ever since I read Legends and Lattes earlier this year, I have been looking for something similar and as charming. I think this is the closest I have gotten, though the stakes are much higher in A Wizard’s Guide to Defensive Baking. T. Kingfisher has a few more backlist titles that I think will capture the level of delightful fantasy I have discovered that I love. I’m looking forward to reading those!T. Kingfisher’s character work is always top tier, and that was true for this story as well. Everyone from our lead character, Mona, to the most minor side character had a distinct personality. Something I loved about Mona is that she is a 14-year-old girl forced to save the day and that makes her angry at the adults who put her in this position by doing nothing. There was something refreshing and so honest about that!