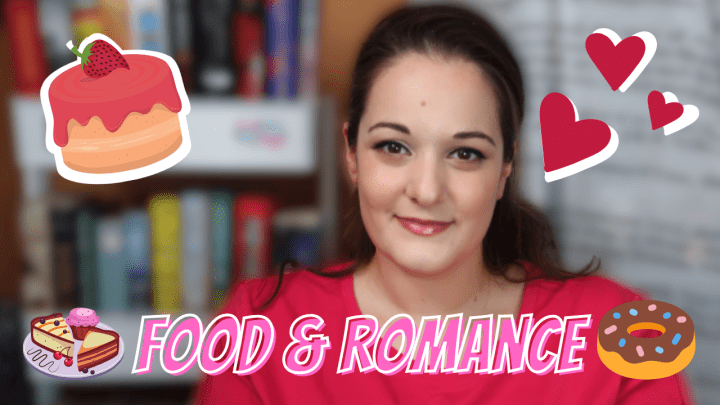 I decided to put together a list of books I have read and loved that have this trope, while also sharing a few that are on my TBR. There are so many out there!

With the Fire on High is a YA romance and is probably the book that started me on this journey of falling in love with romances centred around food. It is also the book that introduced me to that magic that is Elizabeth Acevedo! The book follows Emoni, who is a teen mom with a passion for cooking. There is something almost magical about the way that she cooks.

Somewhere Between Bitter and Sweet is a severely underrated YA romance between the daughter of a restaurant owner and a new employee. Penelope has dreams of opening up her own restaurant, but her parents have different dreams for her, which leads to a lot of tension bI etween them. This book tackles some serious issues, but I thought that the romance was so sweet and respectful. I appreciated that the conflict in the book came from outside forces and was not between the characters themselves.

Battle Royal is not only a romance set on a baking show that is a lot like Great British Bake Off, it is also a grump/sunshine romance! There are a lot of elements to this story. Sylvie was once a contestant on the show and is now a judge. She has a hate-to-love romance with a fellow judge Dominic, and they are also both in the running to bake the cake for the upcoming royal wedding. It is just so fun, and we are getting a sequel!

Sweethand was 100% a cover buy for me! I ended up really enjoying this one and it blends together two of my favourite tropes- food and music! Cherisse is a pastry chef and Keiran is a music producer. They hate each other but are forced to spend time together as they are standing in the same wedding. So good and we are getting a sequel called Don’t Go Baking My Heart!

There is not as much discussion about food in Ties That Tether as there is in the other books on this list, but what was included stood out to me. Azere is Nigerian Canadian, so she has some favourite Nigerian restaurants in Toronto that are described in pretty great detail. It was obvious that Azere appreciates good food, and I loved that!

The Holiday Swap is a Christmas romance and it is the second book on this list that takes place on the set of a cooking show. It is a mix of The Holiday and Parent Trap. It follows twins who swap lives and fall in love with someone from one another’s life. One sister co-hosts a baking show and the other runs the family bakery. It is a fun one!

I just finished reading an eARC of Fake It Till You Bake It and I had such a great time with it and will be buying a finished copy when it comes out in June. I loved that it was the male character who loves baking and owns a bakery! I also loved that both characters had some level of fame. Dominic plays in the NFL and Jada was on a dating show that sounds like The Bachelor and she is hated because she turned down the proposal in the end. Dominic and Jada have great banter!

Rosaline Palmer Takes the Cake is another book set on a baking show, and this one very much feels like we are on the set of Great British Bake Off. I loved all the behind the scene stuff and getting some insight into the editing and how viewers are made to fall in love with the people on the show. This book was more about Rosaline Palmer finding herself because she makes a lot of mistakes throughout and the romance is definitely a slow burn!

Love & Other Disasters is on my TBR for February, so I will have a full review for that posted as soon as I read it! I have been seeing this book absolutely everywhere, and, once again, it follows a romance between two contestants on a cooking show. Dahlia is recently divorced and is looking to do something for herself, and London announces their pronouns on TV and is looking to prove themselves. I have heard that this is super steamy and has some hilarious moments!

Savvy Sheldon Feels Good as Hell is said to have wonderful food descriptions! I do not know much about this one other than that Savvy inherits a kitchen from her grandmother, and I believe that she falls in love with the contractor she hired to renovate the said kitchen.

I love Pride and Prejudice retellings, so I have had my eye on Pride, Prejudice, and Other Flavors since it came out in 2019. I believe that this is a gender-swapped retelling where Trisha is a neurosurgeon and DJ is a chef.

A Cuban Girl’s Guide to Tea and Tomorrow was everywhere when it first came out. I do not know much about it other than that the love interest works at a teashop!

Digging Up Love came out in January and is love story between a baker and an archaeologist!

I love Ruth Reichl’s memoir, Save Me the Plums, so I have been intrigued by her romance, Delicious!. The main character works at a food magazine!

For Butter or Worse does not come out until July, but I cannot wait to get my hands on it! I am always hear for a punny title.

My Fine Fellow came out recently and is a My Fair Lady retelling!

I meant to read A Pho Love Story when it came out last year! It has You’ve Got Mail vibes with competing pho restaurants!

The Donut Trap has such a fun cover and the main character works at a donut shop!

Do you love this trope too? I would love any recommendations!