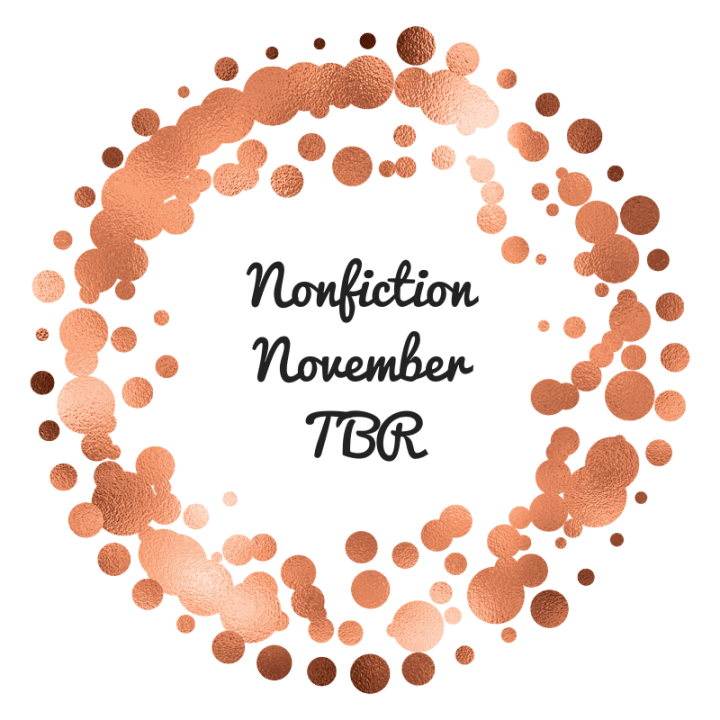 I am so happy that Nonfiction November is here because I have seriously neglected nonfiction this year! I even joined the Nonfiction November Goodreads group this year, which is run by Olive at abookolive on YouTube. There are four word prompts (collection. industry, style, and treatment) that you can use to help guide your reading, but I am choosing to use this as an opportunity to read a few nonfiction titles I have been meaning to get to all year!

I will also be doing the book blogging version of Nonfiction November, which is hosted by  Rennie at What’s Nonfiction,  Katie at Doing Dewey, Veronica at The Thousand Book Project, Christopher at Plucked from the Stacks, and Jaymi at The OC Bookgirl. I look forward to writing these weekly prompts every single year!

The Sackler name adorns the walls of many storied institutions: Harvard, the Metropolitan Museum of Art, Oxford, the Louvre. They are one of the richest families in the world, known for their lavish donations to the arts and sciences. The source of the family fortune was vague, however, until it emerged that the Sacklers were responsible for making and marketing OxyContin, a blockbuster painkiller that was a catalyst for the opioid crisis.

Empire of Pain is a masterpiece of narrative reporting and writing, exhaustively documented and ferociously compelling.

I started listening to the audiobook of Empire of Pain in August and was really enjoying it, but of course, I got distracted by something else. I am looking forward to getting back into it because I know nothing about the Sackler family and their involvement in the opioid crisis. I have also heard incredible things about Patrick Radden Keefe’s other book called Say Nothing.

What makes “cults” so intriguing and frightening? What makes them powerful? The reason why so many of us binge Manson documentaries by the dozen and fall down rabbit holes researching suburban moms gone QAnon is because we’re looking for a satisfying explanation for what causes people to join—and more importantly, stay in—extreme groups. We secretly want to know: could it happen to me? Amanda Montell’s argument is that, on some level, it already has . . .

Our culture tends to provide pretty flimsy answers to questions of cult influence, mostly having to do with vague talk of “brainwashing.” But the true answer has nothing to do with freaky mind-control wizardry or Kool-Aid. In Cultish, Montell argues that the key to manufacturing intense ideology, community, and us/them attitudes all comes down to language. In both positive ways and shadowy ones, cultish language is something we hear—and are influenced by—every single day.

Through juicy storytelling and cutting original research, Montell exposes the verbal elements that make a wide spectrum of communities “cultish,” revealing how they affect followers of groups as notorious as Heaven’s Gate, but also how they pervade our modern start-ups, Peloton leaderboards, and Instagram feeds. Incisive and darkly funny, this enrapturing take on the curious social science of power and belief will make you hear the fanatical language of “cultish” everywhere.

I have been wanting to read Cultish since it came out! I, like many people, have a fascination with cults, but I have never thought about the language we use around cults or things that seems like cults. I have listened to a few episodes of Amanda Montell’s podcast, Sounds Like a Cult, and have found it fun and interesting!

“I drive and say to myself, if I am dying, if this is how I die, then this is how I die.” When N. West Moss finds herself bleeding uncontrollably in the middle of a writing class, she manages to drive herself to the nearest hospital. Doctors are baffled, but eventually a diagnosis—uterine hemangioma—is rendered and a hysterectomy is scheduled. In prose both lyrical and unsparing, Moss takes us along through illness, relapse, and recovery. And as her thoughts turn to her previous struggles with infertility, she reflects on kin and kinship and on what it means to leave a legacy.

Moss’s wise, droll voice and limitless curiosity lift this narrative beyond any narrow focus. Among her interests: yellow fever, good cocktails, the history of New Orleans, and, always, the natural world, including the praying mantis in her sunroom whom she names Claude. And we learn about the inspiring women in Moss’s family—her mother, her grandmother, and her great-grandmother—as she sorts out her feelings that this line will end with her. But Moss discovers that there are ways besides having children to make a mark, and that grief is not a stopping place but a companion that travels along with us through everything, even happiness.

A remarkably honest memoir about heartache and healing, Flesh & Blood opens up a conversation with the millions of women who live with infertility and loss.

I have not seen anyone talk about Flesh & Blood, but I was sent an ALC from Libro.fm a few months ago and I have been intrigued by it ever since. It has been a while since I read a truly powerful memoir! The audiobook is five and a half hours, so it will be nice to have a shorter read to break up some of the longer books on my TBR.

In SPQR, an instant classic, Mary Beard narrates the history of Rome “with passion and without technical jargon” and demonstrates how “a slightly shabby Iron Age village” rose to become the “undisputed hegemon of the Mediterranean” (Wall Street Journal). Hailed by critics as animating “the grand sweep and the intimate details that bring the distant past vividly to life” (Economist) in a way that makes “your hair stand on end” (Christian Science Monitor) and spanning nearly a thousand years of history, this “highly informative, highly readable” (Dallas Morning News) work examines not just how we think of ancient Rome but challenges the comfortable historical perspectives that have existed for centuries. With its nuanced attention to class, democratic struggles, and the lives of entire groups of people omitted from the historical narrative for centuries, SPQR will to shape our view of Roman history for decades to come.

Something about SPQR has been calling out to me since it came out! I would love to learn more about Ancient Rome, and I have heard that Mary Beard writes in a way that is informative, interesting, and accessible.

April 25, 1986, in Chernobyl, was a turning point in world history. The disaster not only changed the world’s perception of nuclear power and the science that spawned it, but also our understanding of the planet’s delicate ecology. With the images of the abandoned homes and playgrounds beyond the barbed wire of the 30-kilometer Exclusion Zone, the rusting graveyards of contaminated trucks and helicopters, the farmland lashed with black rain, the event fixed for all time the notion of radiation as an invisible killer.

Chernobyl was also a key event in the destruction of the Soviet Union, and, with it, the United States’ victory in the Cold War. For Moscow, it was a political and financial catastrophe as much as an environmental and scientific one. With a total cost of 18 billion rubles—at the time equivalent to $18 billion—Chernobyl bankrupted an already teetering economy and revealed to its population a state built upon a pillar of lies.

The full story of the events that started that night in the control room of Reactor No.4 of the V.I. Lenin Nuclear Power Plant has never been told—until now. Through two decades of reporting, new archival information, and firsthand interviews with witnesses, journalist Adam Higginbotham tells the full dramatic story, including Alexander Akimov and Anatoli Dyatlov, who represented the best and worst of Soviet life; denizens of a vanished world of secret policemen, internal passports, food lines, and heroic self-sacrifice for the Motherland. Midnight in Chernobyl, award-worthy nonfiction that reads like sci-fi, shows not only the final epic struggle of a dying empire but also the story of individual heroism and desperate, ingenious technical improvisation joining forces against a new kind of enemy.

I tend to listen to my nonfiction on audio, but I am going to physically read Midnight in Chernobyl. I have attempted the audiobook in the past, but there were too many characters to keep track of! I am looking forward to trying again now that I bought the book and I have heard great things about the TV series as well.

Acclaimed literary essayist T Kira Madden’s raw and redemptive debut memoir is about coming of age and reckoning with desire as a queer, biracial teenager amidst the fierce contradictions of Boca Raton, Florida, a place where she found cult-like privilege, shocking racial disparities, rampant white-collar crime, and powerfully destructive standards of beauty hiding in plain sight.

As a child, Madden lived a life of extravagance, from her exclusive private school to her equestrian trophies and designer shoe-brand name. But under the surface was a wild instability. The only child of parents continually battling drug and alcohol addictions, Madden confronted her environment alone. Facing a culture of assault and objectification, she found lifelines in the desperately loving friendships of fatherless girls.

With unflinching honesty and lyrical prose, spanning from 1960s Hawai’i to the present-day struggle of a young woman mourning the loss of a father while unearthing truths that reframe her reality, Long Live the Tribe of Fatherless Girls is equal parts eulogy and love letter. It’s a story about trauma and forgiveness, about families of blood and affinity, both lost and found, unmade and rebuilt, crooked and beautiful.

I have had Long Live the Tribe of Fatherless Girls on my TBR for a while now, and I am looking forward to finally getting to it! I have heard it is fantastic, and I have not read as many memoirs this year as I would like!

Are you participating in Nonfiction November? What is the best nonfiction book you have read so far this year?