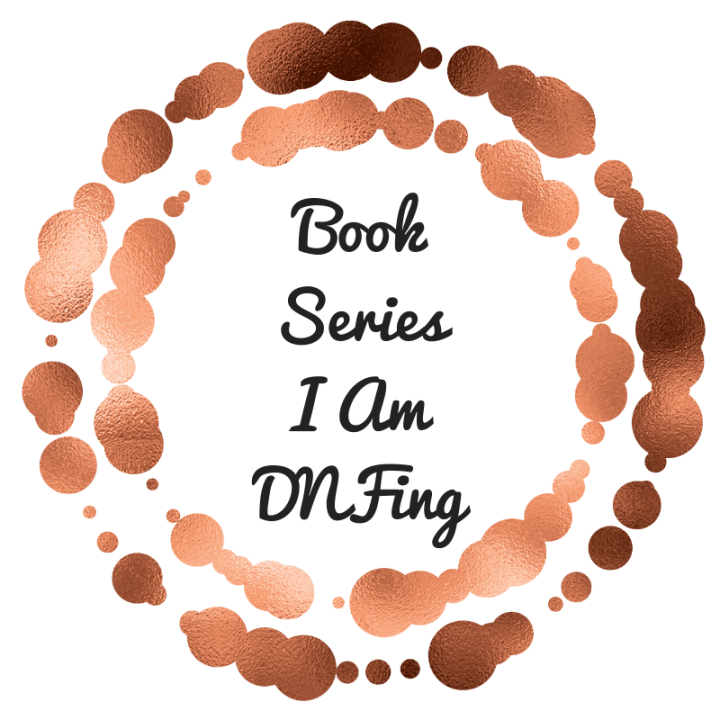 I recently shared all of the book series that I am in the middle of and want to continue on with, so today I am talking about all of the series I have decided to DNF. I just have to many series on the go to commit to a series I am not invested in!

I actually really enjoyed The Knight of Never Letting Go when I read it years ago, but something happened that made me so mad and broke my heart. I haven’t been able to continue on with the series and I know I never will at this point. It is being adapted, which I am a little bit weary about but I am also very curious. I will have to look up some reviews of it before watching!

A Darker Shade of Magic

I don’t know what it is but there is just something about V.E. Schwab’s writing that I don’t connect with. I absolutely loved the premise of A Darker Shade of Magic, but I never found myself deeply invested. The books are just way to long for me to end up just thinking that they are okay.

Another series from Schwab! In theory I should love these books but City of Ghosts was not my favourite. I loved the setting, the atmosphere, and the characters, but again I just think it is something about the writing style that doesn’t work for me.

The Lunar Chronicles is another example of loving the premise more than the execution. A SciFi retelling of classic fairytales has so much potential, but I never connected to any of the characters. I read both Cinder and Scarlet before realizing that the series was ultimately not for me.

Ah I know that The Raven Cycle is so beloved and many people’s favourite series, but Maggie Stiefvater is another author whose writing style I cannot get into for some reason! That pains me because I love the idea of The Raven Cycle and I also read The Scorpio Races where I had similar feelings. I really should sit down and explore why certain writing styles don’t work for me!

I know that this is going to be controversial because I see The Simple Wild everywhere but I really did not like it, especially as a romance. I was more intrigued by the setting and the main character’s relationship with her father than I was by the love story. I thought that it was an example of hate-to-love that went too far!

As much as I did enjoy Stalking Jack the Ripper, I am happy to think of it as a standalone! I don’t think I need to read more from this world or these characters.

While I did enjoy The Gentleman’s Guide to Vice and Virtue when I first read it, the author has since done some things that I am uncomfortable with and I don’t think I am missing anything by choosing to DNF the series!

I recently unhauled Carry On, which pained me because of how beautiful the cover is! However, I just did not enjoy this book at all. I struggled to get into it and is one I probably should have DNFed. Safe to say I never planned on finishing the series!

All the Stars and Teeth

What is it about mermaid books that always sound so good but rarely ever work? I wouldn’t have read All the Stars and Teeth if it were not for a buddy read on Instagram, and, sadly, none of us enjoyed it. It is one of those books that I forgot about as soon as I was finished!

The Belles had such a great premise and I did think the book was good, just not memorable enough for me to want to continue on with the series! There are so many series I am in the middle of, so I need to make sure I focus on the ones I am most interested in.

I love the concept of the DC Icons series and thought that Bardugo did some interesting things with Wonder Woman as a character, but I think I am realizing that I don’t care to read about superheroes! I will stick to the movies!

I absolutely adore Marie Lu, but I think I came to the Legend series too late. I would have loved it if I had read it when it came out and when everyone was raving about it! It is a series that feels very much of its time.

I actually read the first three books in this series and own the fourth book, but War Storm is just so long and I am not sure that I care enough about the characters to want to spend that much time with them.

This is a series that I could be convinced to carry on with, but I would have to reread A Great and Terrible Beauty. I love the setting and the atmosphere, but the books are huge! It would be quite a time investment!

Tiny Pretty Things is a duology, so I really should read Shiny Broken Pieces at some point. I thought the first book was fun and dramatic, but I am not sure I will ever actually prioritize it!

So that is it! Those are all the series I am giving up on! I would love to hear your thoughts on any of these!

30 thoughts on “Series I Am Giving Up On”