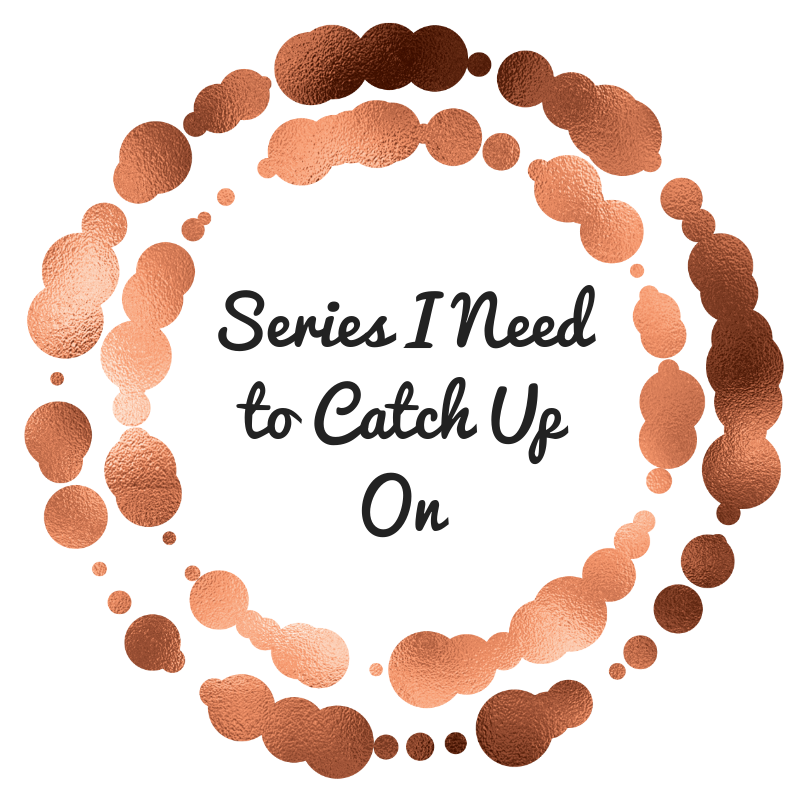 After watching many booktube videos and reading many blogposts, I know that I am not the only one who struggles with finishing series! I am so good about reading the first book in a series and just never picking up the second one, no matter how much I loved the book. There is some mental block there that I don’t fully understand. I thought putting together this list would help me to hold myself accountable! Not all of these series are complete, but there are books that are out that I need to catch up on!

Of all of the series on this list, The Broken Earth trilogy is the one that I want to prioritize most, especially since The Fifth Season was the best book I read in 2020. I have the audiobook for The Obelisk Gate, so I would love to listen to that while reading the physical copy. I hope I can get to that sooner rather than later!

The Murderbot Diaries is my comfort series. I tend to listen to these on audio when I need something light that I know will bring a smile to my face. I also listen to them when I feel a reading slump coming on! I have read the first four novellas, but I haven’t read Home, which is a short story, Network Effect, which is a full length novel, or Fugitive Telemetry, another novella that came out this month.

I have complicated feelings about the Wayward Children series! I absolutely love the prequels, Down Among the Sticks and Bones and In An Absent Dream, but the ones set in the present are not my favourite. That is why I haven’t read Come Tumbling Down. I am thinking about skipping it and going straight to the latest release, Across the Green Grass Fields, as it is a prequel. They are short though, so we will see!

There are currently nine volumes of Saga, and I have read eight of them. I have heard the ninth volume is heartbreaking and it is unclear when the series will continue, so I don’t want to be left with no resolution! I am purposefully putting this one off and have no plans to read it until that tenth volume is announced! It is a fantastic SciFi graphic novel series though, and I highly recommend it.

I have no doubt that I will catch up with The Green Bone Saga soon! I read Jade City a couple weeks ago and absolutely fell in love with it. I bought Jade War right away and really want to read it before the third book, Jade Legacy, comes out later this year.

I reluctantly read An Absolutely Remarkable Thing thinking I wouldn’t like it, but it took me by complete surprise! I really ended up loving it and thought it was an interesting commentary on social media. This is a duology, so it is ridiculous that I haven’t read A Beautifully Foolish Endeavor yet. I have heard mixed things about it though.

As much as I loved , the sheer size of this series intimidates me! I own the first five books, so there really is no excuse. I love Gamache and the setting and all of the side characters. I think once I am a few books in I am going to want to marathon them all. The only problem is that they can be hard to track down!

The only book I have read in this series is actually the second book, The Happy Ever After Playlist, and it is one of my favourite romances. I don’t think I will go back and read the first book, The Friend Zone, but the third one, Life’s Too Short, just came out and I cannot wait to get to it!

Much like with The Friend Zone, the only book in this series I have read in the second one, Love Her or Lose Her, and I am not sure I will ever read the first one, Fix Her Up, as I have heard mixed things. That said, Tools of Engagement just came out and I am excited about it!

I know that this series gets mixed reviews, but, for the most part, I enjoy it! They are quick reads and I love that we get cameos from the other characters in each of the books. Also, there is so much talk about food! The only one I haven’t read is Party of Two, and another book, While We Were Dating, comes out in July.

I thought that Waiting for Tom Hanks was really fun and full of my favourite romcom tropes! The second book, Not Like the Movies, follows my favourite character from the first one, so I really should get to it!

I was blown away by The Eyre Affair and I have been wanting to continue on with the series ever since I read it. I even own the second book, Lost in a Good Book, and I can’t believe I haven’t picked it up yet. I love the premise behind this entire series and it is written for book lovers! I just need to track down all of the books, as they can be hard to find.

I absolutely love Katherine Arden’s writing and The Bear and the Nightingale is one of the most atmospheric books I have ever read. I have been told that the series only gets better from here, so I have no excuses as to why I haven’t continued on with it!

Another series from Katherine Arden! This time it is a middle grade. Small Spaces gave me a new fear of scarecrows and I meant to read Dead Voices in October but never did. Dark Waters comes out in October, so I would love to read them both around Halloween.

The Poppy War broke me and I know that the rest of the series will do that same, so I think that is why I have been avoiding it. I know I am going to love the entire series but I am just not ready for it!

My Lady Jane was so hilarious on audio and I found myself laughing out loud! That said, I have heard mixed things about the rest of the series, but I would still like to give them a try. The authors are also starting another series about historical Marys!

Arc of a Scythe

I love Scythe and meant to pick up Thunderhead, but never did for whatever reason. I have heard that many people were disappointed by The Toll, which makes me a little reluctant to pick it up!

The Long Way to a Small Angry Planet is one of my favourite books and one I think about a lot, so why haven’t I continued on with the series. I have no excuses! I adore Becky Chambers’ writing and characters.

Chronicles of the One

I used to love Nora Roberts’ romance series that had paranormal elements, so I shouldn’t be surprised by how much I enjoyed Year One, which is the start of a fantasy series. I actually own Of Blood and Bone, and I keep meaning to pick it up. I also have the first book in her new fantasy series!

Crazy Rich Asians is one of those cases where I actually prefer the movie over the book, but I still thought that the book was fun! I love these characters and how vivid Kwan’s writing is, so I would love to continue on with the series this summer.

I love weird SciFi, and The Southern Reach trilogy is certainly that. Annihilation was so strange and I was all about it! I just think it is a series that I really need to be in the mood for.

I am so ashamed! I read Red Rising when I first started this blog and have been saying I was going to continue on with it ever since…

40 thoughts on “Series I Need to Catch Up On”