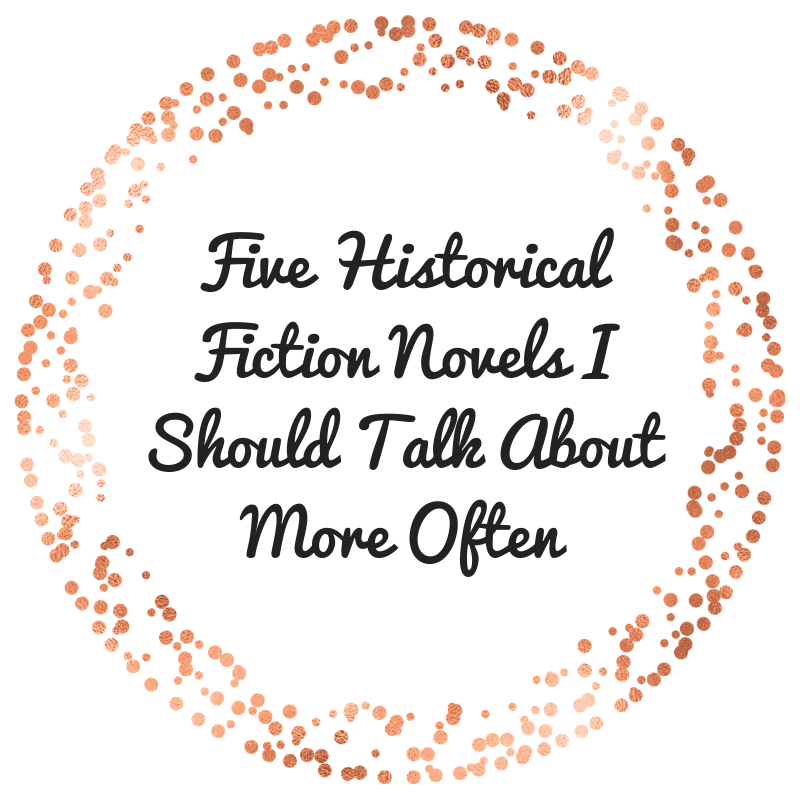 I often say that historical fiction is my favourite genre but I have come to the realization that I do not actually talk about it often on my blog. I think part of that is that I don’t read historical fiction as much as I used to. I want to start getting back into them and to get excited about the genre again. I hope that sharing five historical fiction books I love but never talk about will help encourage me to read them more often!

1878 Paris. Following their father’s sudden death, the van Goethem sisters find their lives upended. Without his wages, and with the small amount their laundress mother earns disappearing into the absinthe bottle, eviction from their lodgings seems imminent. With few options for work, Marie is dispatched to the Paris Opéra, where for a scant seventeen francs a week, she will be trained to enter the famous ballet. Her older sister, Antoinette, finds work as an extra in a stage adaptation of Émile Zola’s naturalist masterpiece L’Assommoir.

Marie throws herself into dance and is soon modeling in the studio of Edgar Degas, where her image will forever be immortalized as Little Dancer Aged Fourteen. There she meets a wealthy male patron of the ballet, but might the assistance he offers come with strings attached? Meanwhile Antoinette, derailed by her love for the dangerous Émile Abadie, must choose between honest labor and the more profitable avenues open to a young woman of the Parisian demimonde.

Set at a moment of profound artistic, cultural, and societal change, The Painted Girls is a tale of two remarkable sisters rendered uniquely vulnerable to the darker impulses of “civilized society.” In the end, each will come to realize that her salvation, if not survival, lies with the other.

It has been years since I have read The Painted Girls but it is something that I think about often. I have talked about it a few times on the blog but not as much as it deserves! What is it about 1800s France that is so fascinating? I love any book that has to do with art in some way. I also love books about sisters. So The Painted Girls was destined to be something I adored, and it was.

A brilliant literary debut, inspired by a true story: the final days of a young woman accused of murder in Iceland in 1829.

Set against Iceland’s stark landscape, Hannah Kent brings to vivid life the story of Agnes, who, charged with the brutal murder of her former master, is sent to an isolated farm to await execution.

Horrified at the prospect of housing a convicted murderer, the family at first avoids Agnes. Only Tóti, a priest Agnes has mysteriously chosen to be her spiritual guardian, seeks to understand her. But as Agnes’s death looms, the farmer’s wife and their daughters learn there is another side to the sensational story they’ve heard.

Riveting and rich with lyricism, Burial Rites evokes a dramatic existence in a distant time and place, and asks the question, how can one woman hope to endure when her life depends upon the stories told by others?

I am always looking for atmosphere in my historical fiction and the setting of Burial Rites is what makes this book stand out. I have not read many books set in Alaska. I could feel the chill in my bones. I also appreciate that it is based on a true story. Although I do not remember everything that happens, I distinctly remember how it made me feel. That is the mark of a good book in my mind. Hannah Kent is also a really talented writer and I can not believe that I have not read more from her yet.

The Doll Factory by Elizabeth

London. 1850. The Great Exhibition is being erected in Hyde Park and among the crowd watching the spectacle two people meet. For Iris, an aspiring artist, it is the encounter of a moment – forgotten seconds later, but for Silas, a collector entranced by the strange and beautiful, that meeting marks a new beginning.

When Iris is asked to model for pre-Raphaelite artist Louis Frost, she agrees on the condition that he will also teach her to paint. Suddenly her world begins to expand, to become a place of art and love.

But Silas has only thought of one thing since their meeting, and his obsession is darkening . . .

There are few things I enjoy more than a Gothic novel. I love the mix of history and horror. It doesn’t hurt that they are always very atmospheric. The Doll Factory is one of my favourite Gothic novels. I do not think I have ever read anything quite this twisted. I was uncomfortable the entire time I was reading it. It continues to haunt me. Art is also a huge part of the story, which we have established is something I love. I was also fascinated by The Great Exhibition. I am crossing my fingers that The Doll Factory makes the Women’s Prize shortlist.

The Essex Serpent by Sarah Perry

Moving between Essex and London, myth and modernity, Cora Seaborne’s spirited search for the Essex Serpent encourages all around her to test their allegiance to faith or reason in an age of rapid scientific advancement. At the same time, the novel explores the boundaries of love and friendship and the allegiances that we have to one another. The depth of feeling that the inhabitants of Aldwinter share are matched by their city counterparts as they strive to find the courage to express and understand their deepest desires, and strongest fears.

Speaking of Gothic novels… wow! Sarah Perry is a master of the genre in my mind. The Essex Serpent is extremely atmospheric that you almost feel the weight of it. What I loved so much about The Essex Serpent was the Cora, the main character. I appreciated that she was setting off to pave her own path and I enjoyed seeing the world through her eyes. This book is slow, hard to get into, and often confusing but in the most brilliant way!

Juliet Armstrong is a dissatisfied radio producer in a 1950s London that is recovering from the war as much as she is. During World War Two, Juliet was conscripted into service, transcribing conversations between an MI5 agent and a ring of suspected German sympathizers. The seemingly dull work quickly plunged Juliet into a treacherous world of code words and secret meetings where Juliet herself was sent into the field. These moments of intrigue and romance feel like a lifetime ago as Juliet trudges through her commute, her job and her new life. But as Juliet and the rest of London find ways to return to normal, her routine is upended by an encounter with a mysterious man from her past life.

Haunted by the relationships and actions of her past and facing a very real threat in the present, Juliet cannot escape the repercussions of her work for the government. With no other choice, Juliet is quickly pulled back into the life of espionage she thought she’d left behind. Kate Atkinson’s latest novel brings mid-century London to life in a gripping tale of deception and consequences.

Transcription was my first and only Kate Atkinson novel. I can not wait to read more from her! WWII fiction can become repetitive and difficult to make original, but Transcription does not fall into that trap. I very much appreciated Juliet and that she was young and naive. That said, she was also strong and people underestimated her. Something about the story felt very authentic. There was also some humour that I wasn’t expecting!

Do you enjoy historical fiction? Any recommendations?