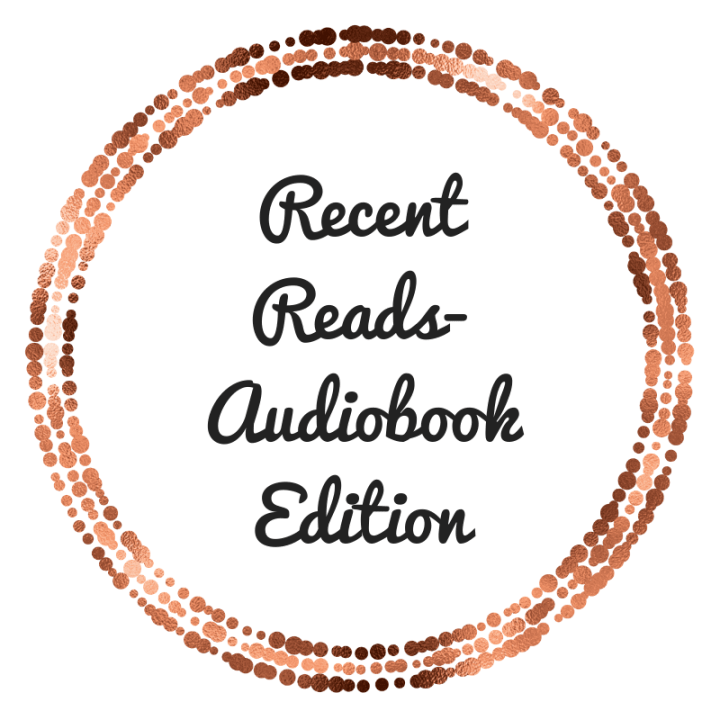 I am always listening to audiobooks, and, while I do wrap-ups every single month, I usually only talk about the story itself and not the fact that I listened to the book on audio or about the narrator or the overall listening experience. I have decided that I am going to do these recent reads type posts every once in awhile where I talk about a few of the audiobooks I have listened to recently and share my thoughts on the audiobook as well as the story.

I am currently in the middle of Empire of Pain and it is interesting so far. I love nonfiction on audio, as I think I am an auditory learner and take in more information that way. I knew nothing about the Sackler family going into this, so it is interesting to learn more about their history and the part they have played in the opioid crisis. I love the way that Patrick Radden Keefe has written this book- it reads very much like narrative nonfiction and is well researched. Another bonus is that the author himself narrates the audiobook and he is amazing at it! The audiobook is 18 hours, so it is definitely one I am taking my time with.

I put up a poll both here and on Instagram asking for your helping in choosing my next audiobook. I was so surprised that A Slow Fire Burning by Paula Hawkins won both polls! So I have started that and am about 15% in as I am writing this but I am sure I will have listened to much more by the time this post goes up tomorrow because I am hooked already. Rosamund Pike, who starred in Gone Girl and in my favourite movie, Pride and Prejudice (2005), narrates this one and she is incredible. The audiobook is just over 9 hours and I almost wish it were longer just to hear voice!

The last audiobook I listened to was Gods & Monsters, which is the third and final book in the Serpent & Dove series. While I much preferred this book over the Blood & Honey, it did not hold a candle to Serpent & Dove. I am also not sure I would recommend the series on audio, though that is how I read each of the books. I really liked the female narrator, Saskia Maarleveld, but I found the male narrator, Holter Graham, was often over the top, especially when narrating the dialogue for the female characters within his chapters. Also, the audiobook is 17 hours long, so it is a commitment and you really have to pay attention because there is a lot going on.

I absolutely loved Sally Rooney’s first two books, though I understand why they wouldn’t be for everyone. So I was so excited when Libro.fm sent me an ALC of Beautiful World, Where Are You. I stopped everything to listen to it and I ended up having mixed feelings. I will say that this is the first book of hers that I listened to on audio, so I am not sure if that had something to do with it. I liked Aoife McMahon’s narration, but I wonder if Rooney’s writing style just lends itself better to print. The audio was about 10 hours long and I felt like it dragged. I didn’t relate to this one as much as her others and was not invested in the characters. It had some interesting things to say and a lot of early reviewers have loved it, but it just was not my favourite in the end, sadly.

I just love Becky Chambers’ writing- there is something so comforting about it! A Psalm for the Wild-Built was so delightful and everything that I have come to expect from Becky Chambers. No one creates more lovable and intriguing characters! I love that our main character is a tea monk who wants to explore the world and, in doing so, runs into a robot. This ends up being the first meeting between humans and robots in many years. The book is really about their conversations and their misunderstandings of one another and it is just wonderful. I absolutely loved it on audio, especially since it was only 4 hours. It was a calming experience to listen to it while sitting on the beach!

I have listened to all of the books in Jasmine Guillory’s The Wedding Date series on audio and I love reading them that way. Janina Edwards has narrated them all and she does a fantastic job. Side note, she is also one of the narrators for The Final Revival of Opal & Nev, which is a must listen! While We Were Dating might just be my favourite in the series so far. I also think it is the longest one at over 10 hours, but it didn’t feel that way. I could have stayed with these characters longer. I just love the fake dating trope!

Falling ended up being quite a disappointment for me, but that had nothing to do with the audiobook. I thought Steven Weber captured the tone perfectly and may have been one of the reasons why I actually finished this book. It started off strong and I loved the premise, but it fell into some stereotypes and clichés that I didn’t appreciate and thought were unoriginal. There were so many different ways this story could have gone and would have been more interesting!

There are some books that are just meant to be listened to, and I think that My Contrary Mary is one of them! This book, along with the entire Lady Janies series by the same authors, is so satirical and ridiculous that I feel like hearing Fiona Hardingham’s narration helped me to get it. She captures the humour perfectly and I have never laughed so hard while listening to an audiobook. It is a long book at 12 hours, but I enjoyed every minute and could have listened to hours more. I am also fascinated by Mary Queen of Scots and I loved this twist on her story. There are also so many nods to the TV show Reign, so that was fun!

So that is it for now! Let me know if you enjoyed this and I will continue to highlight the audiobooks that I listen to in this way. I am always looking for audiobook recommendations, so I would love to hear any recs you have!