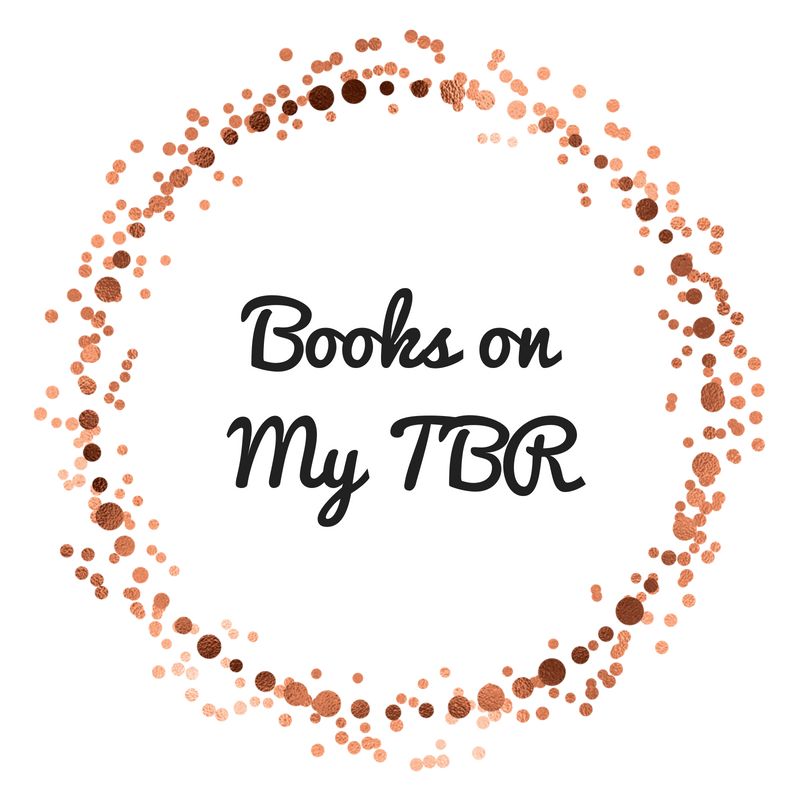 I have added so many interesting books to my TBR lately and I thought that it might be fun to share them with you, and talk about why I am interested in reading them. This will probably be something that I do more often!

The Anomaly by Michael Rutger

Not all secrets are meant to be found.

If Indiana Jones lived in the X-Files era, he might bear at least a passing resemblance to Nolan Moore — a rogue archaeologist hosting a documentary series derisively dismissed by the “real” experts, but beloved of conspiracy theorists.

Nolan sets out to retrace the steps of an explorer from 1909 who claimed to have discovered a mysterious cavern high up in the ancient rock of the Grand Canyon. And, for once, he may have actually found what he seeks. Then the trip takes a nasty turn, and the cave begins turning against them in mysterious ways.

Nolan’s story becomes one of survival against seemingly impossible odds. The only way out is to answer a series of intriguing questions: What is this strange cave? How has it remained hidden for so long? And what secret does it conceal that made its last visitors attempt to seal it forever?

Indiana Jones meets The X-Files!? Yes please!! The reviews for The Anomaly have been amazing so far. It is being classified as a horror, a mystery/thriller, and a SciFi which is a niche that appeals to me. I am also trying to read more debut novels this year, and this sounds like an amazing one! The Anomaly is also a Book of the Month pick and I am seeing everyone post pictures of it on Instagram! I wish we had Book of the Month in Canada! 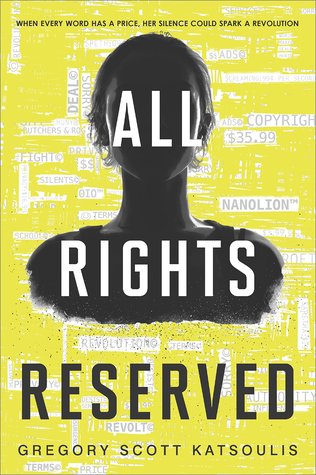 In a world where every word and gesture is copyrighted, patented or trademarked, one girl elects to remain silent rather than pay to speak, and her defiant and unexpected silence threatens to unravel the very fabric of society.

Speth Jime is anxious to deliver her Last Day speech and celebrate her transition into adulthood. The moment she turns fifteen, Speth must pay for every word she speaks (“Sorry” is a flat ten dollars and a legal admission of guilt), for every nod ($0.99/sec), for every scream ($0.99/sec) and even every gesture of affection. She’s been raised to know the consequences of falling into debt, and can’t begin to imagine the pain of having her eyes shocked for speaking words that she’s unable to afford.

But when Speth’s friend Beecher commits suicide rather than work off his family’s crippling debt, she can’t express her shock and dismay without breaking her Last Day contract and sending her family into Collection. Backed into a corner, Speth finds a loophole: rather than read her speech–rather than say anything at all–she closes her mouth and vows never to speak again. Speth’s unexpected defiance of tradition sparks a media frenzy, inspiring others to follow in her footsteps, and threatens to destroy her, her family and the entire city around them.

I have been on a bit of a Science Fiction kick lately, and All Rights Reserved sounds fantastic! The idea beyond this story is really intriguing to me. In a world where copyrights and trademarks are a hot topic, it is interesting to see a SciFi about a world where every word and gesture is copy-written. A lot of reviews say that it hits close to home, and those are the kind of dystopian novels that I enjoy reading. I want books like this to make me feel a little uncomfortable because I get the feeling that it could happen!

The Summer Wives by Beatriz Williams 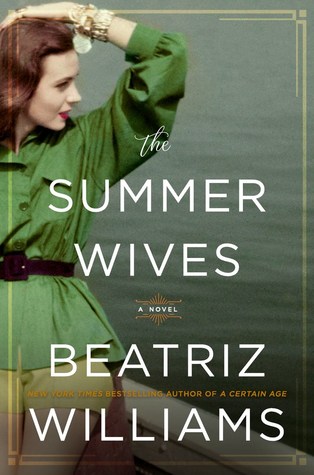 In the summer of 1951, Miranda Schuyler arrives on elite, secretive Winthrop Island in Long Island Sound as a naive eighteen year old, still reeling from the loss of her father in the Second World War. Although a graduate of the exclusive Foxcroft Academy in Virginia, Miranda has always lived on the margins of high society. When her beautiful mother marries Hugh Fisher, whose summer house on Winthrop overlooks the famous lighthouse, Miranda is catapulted into a heady new world of pedigrees and cocktails, status and swimming pools. Isobel Fisher, Miranda’s new stepsister—all long legs and world-weary bravado, engaged to a wealthy Island scion—is eager to draw Miranda into the arcane customs of Winthrop society.

But beneath the Island’s patrician surface, there are really two clans–the summer families with their steadfast ways and quiet obsessions, and the working class of Portuguese fishermen and domestic workers who earn their living on the water and in the laundries of the summer houses. Uneasy among Isobel’s privileged friends, Miranda finds herself drawn to Joseph helps his father in the lobster boat, but in the autumn he returns to Brown University, where he’s determined to make something of himself. Since childhood, Joseph has enjoyed an intense, complex friendship with Isobel Fisher, and has a catastrophe that will shatter Winthrop’s hard-won tranquility and banish Miranda from the Island for nearly two decades.

Now, in the summer of 1969, Miranda returns at last, as a renowned Shakespearean actress hiding a terrible heartbreak. On its surface, the Island remains the same–determined to keep the outside world from its shores, fiercely loyal to those who belong. But the formerly powerful Fisher family is a shadow of itself, and Joseph Vargas has recently escaped the prison where he was incarcerated for the murder of Miranda’s stepfather eighteen years earlier. What’s more, Miranda herself is no longer a naive teenager, and she begins a fierce, inexorable quest for justice to the man she once loved . . . even if it means uncovering every last one of the secrets that bind together the families of Winthrop Island.

The first thing that intrigued me about The Summer Wives was definitely the cover. I love covers that have a retro vibe to them! I also love that the book is set in the 50’s and the 60’s, which for someone who loves historical fiction, are decades I rarely read about. It is also set on an island during the summer, which definitely appeals to me. The reviews are amazing as well!

Acclaimed scientist Hope Jahren has built three laboratories in which she’s studied trees, flowers, seeds, and soil. Her first book is a revelatory treatise on plant life—but it is also so much more.

I have rediscovered my love for memoirs in 2018, and Lab Girls is the one book that has been recommended to me most often. I love that this is a book written by a female scientist and that she focuses her studies on plants and trees. I am interested to see how she weaves together the story of her life and her work . I saw this quote and instantly thought “This is a book I need to read.”

Science has taught me that everything is more complicated than we first assume, and that being able to derive happiness from discovery is a recipe for a beautiful life.

The New York Times-bestselling author of Fates and Furiesreturns, bringing the reader into a physical world that is at once domestic and wild—a place where the hazards of the natural world lie waiting to pounce, yet the greatest threats and mysteries are still of an emotional, psychological nature. A family retreat can be derailed by a prowling panther, or by a sexual secret. Among those navigating this place are a resourceful pair of abandoned sisters; a lonely boy, grown up; a restless, childless couple, a searching, homeless woman; and an unforgettable, recurring character—a steely and conflicted wife and mother.

I am always on the hunt for a collection of short stories that appeals to me. I love the idea behind a short story collection, but I rarely find one that clicks with me. I have heard amazing things about Lauren Groff’s writing (I have Fates and Furies on my TBR as well) and the idea of a collection of stories all set in Florida sounds interesting.

If you have read any of these books I would love to hear your thoughts on them!

What books have you recently added to your TBR?

27 thoughts on “Books I Recently Added to My TBR”