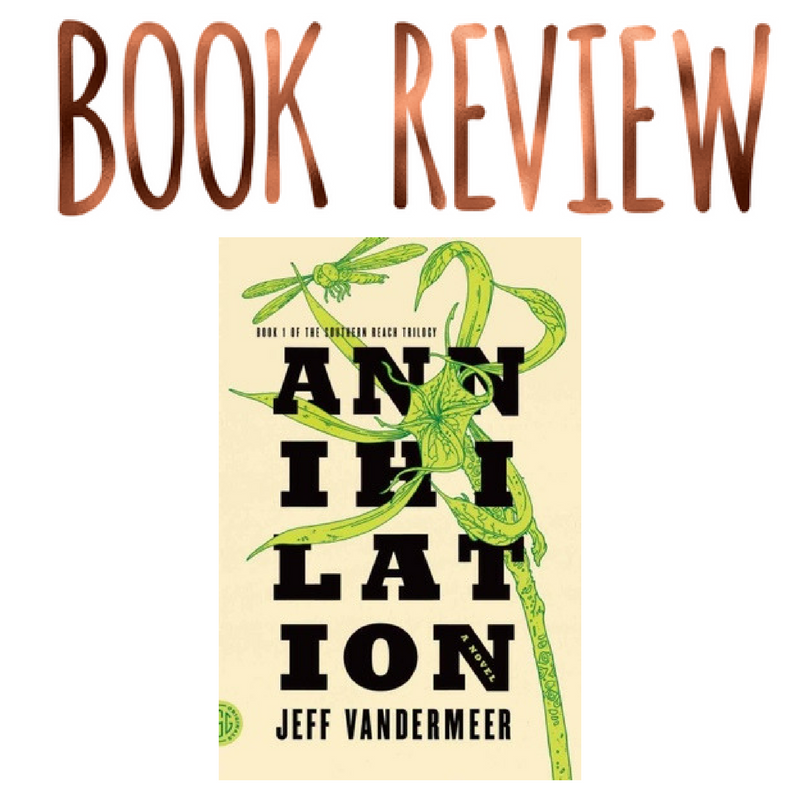 Goodreads Summary– Area X has been cut off from the rest of the continent for decades. Nature has reclaimed the last vestiges of human civilization. The first expedition returned with reports of a pristine, Edenic landscape; all the members of the second expedition committed suicide; the third expedition died in a hail of gunfire as its members turned on one another; the members of the eleventh expedition returned as shadows of their former selves, and within months of their return, all had died of aggressive cancer.

This is the twelfth expedition.

Their group is made up of four women: an anthropologist; a surveyor; a psychologist, the de facto leader; and our narrator, a biologist. Their mission is to map the terrain and collect specimens; to record all their observations, scientific and otherwise, of their surroundings and of one another; and, above all, to avoid being contaminated by Area X itself.

They arrive expecting the unexpected, and Area X delivers—they discover a massive topographic anomaly and life forms that surpass understanding—but it’s the surprises that came across the border with them, and the secrets the expedition members are keeping from one another, that change everything.

Jeff Vandermeer managed to make me feel like I was there.  My heart was racing, I had goosebumps, and my skin was crawling.  The writing is vivid, and there is a lot of world building.

I can confidently say that I have never read a book quite like Annihilation before.  It is Science Fiction, Mystery, Horror, and Dystopian all wrapped in to one weirdly wonderful novel. I have seen some people describe it as “weird science” and that certainly fits.

I thoroughly enjoyed the fact that all of the characters in this novel are women. It was interesting any refreshing to read about a team of women working together in the absence of any men.

We follow an unnamed narrator who is a biologist.  I appreciated the fact that we were given some of her back story so that the reader has a better understanding of why she is the way that she is and why she makes certain decisions. She is unlikable in a lot of ways, but I was still rooting for her.  She is also brilliant, and it was interesting watching her start to piece things together.

I wish that the world and what was happening was explained.  This book left me with so many questions and zero answers. I am hoping that I will gain a little more understanding in the next two novels, but I wanted Annihilation to at least give me something!

“Silence creates its own violence.”

I am still having such a hard time deciding how I felt about Annihilation.  I was completely captivated by it but I am not sure if I actually liked it? I think maybe that is the whole point.  I will definitely be finishing the series because I need some answers and I have to know where the story goes.